Every year Black Friday sales get more hyped and involve more ridiculous deals.  In some cases that’s a bad thing, especially when it involves camping outside stores for silly amounts of time to get a chance at one of the only two units available in a particular sale.  In many others it’s just a great time to save some money. 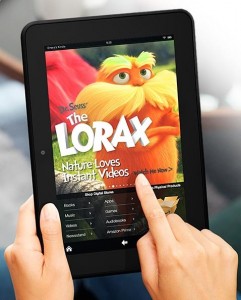 Since we know that a sale is on the way let’s take a look at what to expect as far as discounts this week.

According to Buyer’s Review, we can expect the following deals in brick & mortal stores this Friday:

We do have every reason to believe that Amazon will use this opportunity to further promote the Kindle line directly through their own storefront as well, though.

Sadly, we’re not going to be seeing a sale on the Kindle Paperwhite.  The eReader side of things has proven so popular since the Paperwhite was released that an order today will take over a month to get to its destination, just barely making it in time for Christmas if you spring for 2-day shipping.  In a matter of days it will likely be impossible to order a Kindle Paperwhite and have it before 2013.

We will certainly be seeing this sale day used as an opportunity to promote the Kindle Fire and Kindle Fire HD, however.  An effort was clearly made to get the Kindle Fire HD 8.9” out before Black Friday, which indicates that the larger tablet will be a part of the promotion as well.

Looking at the store offers above, nobody is actually discounting the Kindle Fires themselves.  All that is being added is a promo gift card.  Given all the blowback Amazon has been getting from these same retailers about showrooming, I expect that the online deal will go a bit further.  How much further is difficult to predict, but 10-20% off the price would create a huge surge of interest.

Remember that Amazon is using the Kindle Fire as a cheap option for content sales.  They’re not making much on the devices themselves.  As such I don’t think we can expect to see a $99 Kindle Fire, even using refurbished 1st Gen models.  Since recent teardowns point to there being a bit more profit than the earlier generation allowed for in a single unit, however, they have some leeway.

I know that I’ll be watching for a $160 Kindle Fire HD and I would be surprised if I don’t see one by the end of the week.