Beginning on Sunday, March 6th, customers at AT&T owned stores nation-wide should be seeing something new on the shelves.  The Kindle 3G, yes only the $189 model at this point since it is a cellular store, will be on display and available for customers wanting to grab on the spot or compare side by side with something like the iPad.  Heck, it’ll probably even be on the same wall for some easy reference.

The advantage of having the Kindle available to customers through these stores is clear.  Not terribly impressive at this point, but clear.  This makes one more place for people wanting to test drive a Kindle to stop in at.  That’s all.  I suppose it might be convenient for some people, but other than that there are no real incentives for people shopping at AT&T.

Wow.  That was short.  Ok, guess we have room for more news!

Free Kindles in Our Future? 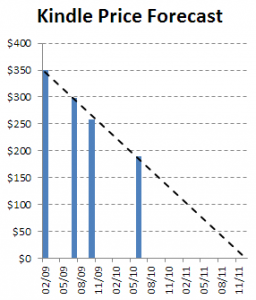 There’s been talk lately about the possibility of free Kindle devices coming to us as early as November of this year.  Now, take this with a grain of salt, but I wouldn’t entirely discount it.  The rumor stems from an examination of the price drops that the Kindle has experienced since it first came on the market.  Apparently they’ve been pretty steadily linear so far.  So much so that it looks as if we can predict precisely when the price will hit zero.  When this was mentioned to Jeff Bezos last year, he is reported to have said “Oh, you noticed that!” with a smile and left it at that.

Recent speculation has involved a couple different ways that such a free Kindle could manifest.  While some people think it could end up being incentive in some promotion (i.e. Buy 30 eBooks, get your Kindle Free!), I consider the most likely scenario to be the Amazon Prime option.  While there are already a number of benefits to being a Prime member including free 2-day shipping on everything and, more recently, free streaming movies, wouldn’t it be that much more tempting to holdout customers if they got a free Kindle in the deal?

This would go that one step further toward making the Kindle, and Amazon in general, the first stop for any consumer purchase.  I know, having had a Prime membership for a while now, that I’m willing to choose Amazon over other retailers for no other reason than the quick shipping on most things already.  If they beef up their movie selection, I can see it replacing my Netflix account too.

Now, I know that I’m not one to talk, having already expressed my own eReader preferences, but if they sent a Kindle to my house even back when I was fully in the Nook camp and I didn’t have to pay a thing for it, the convenience might well have been enough to win me over.  Maybe that’s what the plan is?  An insidious plot to gain our business by giving good value for the money would be novel, I suppose!