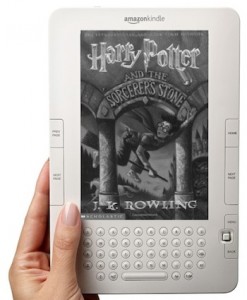 With the announcement that the Harry Potter series will be offered in eBook for the first time through the author’s very own distribution system (via Kindle, Nook, and pretty much any other device you care to name) rather than through the normal channels or in partnership with any publishing company, J.K Rowling has almost certainly upset some people.  More importantly, however, her decision to release the incredibly popular series free of DRM constraints, relying instead on digital watermarking that will identify the original purchaser should a copy be found being distributed, brings the question of Digital Rights Management back to the front of our minds.

The philosophy behind this move will make sense to many people.  If you buy an eBook, why should it matter what device you decide to read it on?  If you own both a Kindle and a Nook, shouldn’t it be possible to move between them as desired?  Publishing companies, as well as eBook distributors like Amazon and Barnes & Noble, have traditionally felt that to be wishful thinking.  After all, if you can read the eBook on whatever you want, what is to stop you from giving a copy to your friends and family, or even throwing it onto the internet where anybody who wants to read it can get to it for free?  They see the restrictions as worth the price if it means that authors and publishers will continue to get their cut for each reader who comes along.

I look at this release as an experiment.  We will get a chance to see how an author fares when she takes an already established and well known collection of books and releases them digitally with very little control.  Will Harry Potter fans show up in huge numbers to buy the series yet again just so that they can read it on their Kindles?  Is it too late to catch the attention of most now that the series has already sold so well?  Perhaps the majority will even feel entitled to pirate the series, having already spent as much as $150+ on a complete set of the hardcovers.  This last point, in particular, holds certain weight for me since it gets to the heart of the DRM issue at hand.

If you buy for one medium, be it paper or Kindle, are you paying for the specific instance of that product, or are you paying for access to the information it contains.  If the former, then the DRM scheme we have now should be fine.  If anything, it is fairly lenient.  You would be paying for the opportunity to read a book on one specific platform and anything else is extra.  If, on the other hand, we are buying the information contained in the instance, then it makes sense to be able to access it via any device we have on hand.  Maybe paper books make more sense as collectables in a system like that? Learn how to open ICA file.

Regardless of what the truth is, or how the public will choose to interpret it given this opportunity, Rowling is going to make loads of money.  Kindle owners are going to show up for this one.  The difference between tens and hundreds of millions of dollars could be how we have to judge the outcome of this experiment in the end.  It could easily become a point in favor of the abolishment of restrictive DRM, if people are honest.