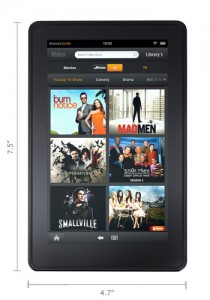 So, clearly the Kindle Fire was destined to be a big thing from the moment it was announced.  In addition to being a part of the bestselling Kindle line, the pricing alone would have been sufficient to make people sit up and take notice.  Not many people expected anything less than $250 before the press conference, especially not a full 20% less.  It seems that even Amazon wasn’t expecting how much attention their new tablet would get them, though.

Recent analyst estimates have indicated that since pre-orders began on the Kindle Fire, currently scheduled to begin shipping by November 15th, as many as 50,000 units per day have been sold.  On the first day alone, as many as 95,000 pre-sales are believed to have occured.  In light of this, Amazon CEO Jeff Bezos has announced that he has dramatically increased the number of units ordered for this year’s production. Even he apparently wasn’t quite ready for the splash being made.

In addition to the fact that the Kindle Fire is priced so impressively competitively, seeming to have single-handedly caused a drastic drop in Android tablet prices over the past few weeks, the company has brought a lot to bear on the new product to make it appealing for customers, new and old alike.  While the obvious connection to the other Kindles exists, this is not primarily intended to serve as an eReading device.  The Kindle App still works well, and the color screen will allow for a large variety of content that has as yet been unable to join in on the eReader fun, but there is a lot more going on.

Amazon Instant Video, for example, will probably serve as the greatest draw for most people.  While the new tablet will only have 8GB of storage space onboard, the Android operating system included has been highly customized to allow the greatest possible integration with Amazon’s web services.  This means that if you have a wireless network handy, Amazon will be able to bring you any video content you have access to at a moment’s notice.  They’ll even save your stopping point for later if you set something down for whatever reason.  This service has been undergoing fairly constant expansion in recent months with tens of thousands of new titles being added as deals come together with new providers.  A fair percentage of this video content is even freely available with Amazon Prime subscription, a free month of which will accompany every device.

Given how appealing the media consumption angle is likely to be for customers, it is not at all surprising to see how hard Amazon is pushing the Kindle Fire.  While some analysts are convinced that they are losing as much as $10 on every tablet sold, creating the sort of long lasting customer relationship that this has the potential to form can only be good in the long term.  It might not be poised to overthrow the iPad any time soon, but the justifiable excitement over the newest Kindle is hard to ignore.