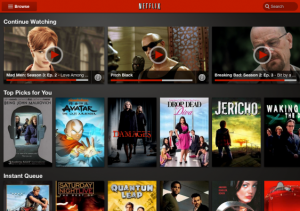 It was known well ahead of the official announcement for the device ever took place that the Kindle Fire would be intended for video more than anything else.  Perhaps due to that pressure and perhaps just as part of an overall trend in the market, the Nook Tablet was designed along similar lines.  While this doesn’t necessarily mean much on its own, it spurred along at least one other development that might mean a great deal more attention for the Android community as a whole.

Amazon’s intent to promote their own streaming video service is clear.  Their library has been growing quickly over time, including many titles being given away “free” with Amazon Prime.  This is naturally something of a concern for a company like Netflix that is suddenly faced with competition from somebody as big as Amazon.  Although Netflix has not commented on it, something definitely spurred them along to push forward their new tablet app upgrade for Android weeks or months ahead of iOS.

The Nook Tablet practically relies on Netflix and other streaming services to function, all the more so because Barnes & Noble currently offers nothing analogous to Amazon’s video services.  They also began advertising a uniquely deep connection with Netflix immediately following the reveal.  As Kindle Fire owners have likely noticed by now, the Netflix app in the Amazon App Store isn’t exactly lacking either.  They went for the maximum possible audience with this update and it seems likely to take.

The implications here go beyond benefits for owners of these new 7″ tablets, however nice those are to have.  This is one of the first times that the Android platform has received special attention ahead of the iOS equivalent.  That sort of thing does not happen without a fair degree of confidence in the potential profitability. If the Kindle Fire alone, or even the collection group of it and all of the competing $200 tablets springing up from companies like B&N and Kobo, is considered important enough to be prioritized ahead of the market dominating iPad then it could easily be a sign that tides are changing.

Part of the bar to Android’s widespread adoption in tablets has been the fact that quality development tends to get prioritized for the competition.  Whether you blame it on the fragmentation of the ecosystem due to frequent non-mandatory upgrades, lack of faith in Google’s offering as a whole, or the lack of a truly major name product to line up behind, the situation has now changed. With luck, this will build up some momentum.

While I have nothing against Apple or the iPad, some heated competition would go a long way toward not only improving their product but creating some genuinely functional alternatives.  The strength of iOS that everybody else lacks isn’t the iPad’s hardware or aesthetic.  Its main virtue is the functionality that primarily comes from the Apple App Store.  Neither the Kindle Fire nor the Amazon App Store is a match for Apple.  It isn’t likely that a single company or product will be any time soon.  What it does do is get the ball rolling, so to speak.