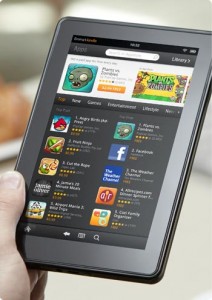 So, Amazon knows that some of you will be rooting the Kindle Fire by now.  It’s hard to imagine otherwise at this point, given the state of the competition and the community of Android enthusiasts who love to unlock the full functionality of the OS.  What’s fairly unusual about Amazon’s approach to this, though, is that they don’t really seem to care and won’t be making any major moves to prevent it.

For those unfamiliar with the term, “rooting” a device means gaining unrestricted access to the device’s software in order to, among other things, install a fresh or custom version of the operating system that is more in line with what you are personally interested in.  The Nook Color, for example, was widely regarded to be an impressive budget tablet after rooting despite its less than impressive default feature set at release.  Rooting is common practice on Android devices, especially when by default these devices prevent users from accessing the Android Marketplace or when manufacturers stop supporting software updates for older devices.  This is essentially the same process as Jailbreaking your iOS devices and the results are comparable.

Amazon representative Jon Jenkins, director of the Silk browser project for the Kindle Fire, admitted “It’s going to get rooted, and what you do after you root it is up to you.”  In the same interview he admitted to not even being sure if the bootloader was locked, which is just one of the many ways that Android is closed off to potential hackers.  This doesn’t mean that Amazon will offer any special support for such endeavors, and indeed it will still most likely result in a breach of warranty for anybody who chooses to go this route, but they don’t seem to see much profit in staying on top of any potential exploits and holes in the security.

It’s a novel approach for a major developer.  For the most part companies tend to overreact to what they view as a threat, often to the point of forcing normal users into less enjoyable experiences as a result.  It also implies a certain level of confidence in the experience being delivered.

Amazon is essentially gambling on the idea that the Kindle Fire’s unique interface and distinctness from the generic Android experience will be enough to keep users locked in.  They have spent a great deal of time and effort, by most accounts, in creating something distinct that customers will feel worth investing in.  Of course it will probably help that without the Kindle Fire‘s OS it will likely be difficult to make use of Amazon’s cloud services.  If the Silk Browser is genuinely faster than the competition as it claims to be then that alone would be enough to make you hesitate to switch. Learn how to open BAK file.

Basically, if all you want is the hardware then you’re in luck.  Grab it, root it, play with normal Android all you want.  It provides a decent amount of power for the $199 price.  What many of us are hoping for though, and what I think Amazon is banking on, is that they have done a good enough job to make it not even worth the effort.