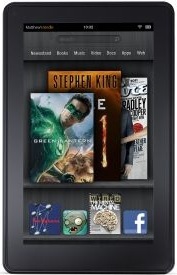 One of the biggest obstacles that Amazon is going to have to overcome in order to continue expanding its Kindle line at a decent rate is the complicated international release process.  That hasn’t stopped them so far, of course.  Some analysts are anticipating, for example, that the Kindle Fire will control as much as 50% of the Android Tablet market in 2012.  A great start, but it still doesn’t really make an impact against the market dominating iPad which is already around in over a dozen countries.

The first step in improving their new tablet’s presence is coming in January 2012 when according to supposed insider sources speaking to tech blog Know Your Mobile the UK will be the first country outside the United States to get the Kindle Fire.  It isn’t exactly a surprise, given the history of Kindle releases and the ease of localization, but it is a step in the right direction.  What’s important will be what comes next, which could end up being somewhat unpredictable given the peculiarities of the device.

Obviously the first instinct is to look to Anglophone countries that require minimal modification of the user interface.  Amazon has spent a lot of effort on getting things working properly, after all, and the need for redesign may at times be significant when dealing with alternate languages.  I would guess that this will not be the primary factor in determining who comes next, though.  Given the Kindle Fire’s emphasis on consuming a variety of media (especially video) via data streaming, chances are good that they will go where the content rights are most easily acquired.

This will likely sync up somewhat with the Anglophone list, I’m sure, but there’s definitely the chance of unexpected choices given the increasing general wariness being expressed in many of Amazon’s more established markets over their huge influence.  The one thing that Amazon has to know that they can’t do with the Kindle Fire is release it like the Barnes & Noble Nook Tablet. While the Netflix streaming is nice, as are most of the content apps that are currently available, the device itself is completely built around Amazon.com integration and would be crippled by the lack of their servers.

Regardless of the less immediate future, UK customers can look forward to a great experience.  The Kindle Fire has become a hit in America for good reasons and will have had time in the interim to be polished even further.  The video streaming is wonderful and likely to be tied to Amazon’s LOVEFiLM brand rather than the Amazon.co.uk Prime service.  Music and cloud storage in general seem to work wonderfully for almost everybody, and indications are good that the vast majority of WiFi connectivity issues will have been addressed prior to this launch.  Even the reading experience isn’t precisely bad, however much better the Kindle E INK eReaders might be.  Expect official announcement early on as we enter 2012.