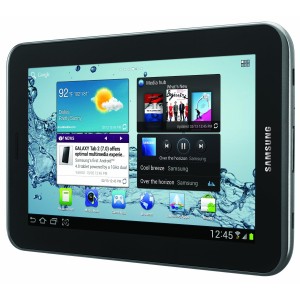 There are loads of new 7” tablets coming out lately that have their eyes on the Kindle Fire’s success.  The common theme seems to be having either slightly higher specs and a few of the features that people complain the Kindle Fire lacks, or a lower price point that doesn’t preclude basically functioning in the ways that matter.  As I’ve mentioned numerous times here, companies who are looking at just the hardware or just the price and picking these out as roads to success are missing the point.

Samsung’s first attempt at a 7” tablet was not precisely groundbreaking.  For a smaller device, the Galaxy Tab was impressive and did practically anything you might want a tablet to do.  It packed more power and features into that small package than any other Android tablet I can think of to come out in 2010.  Still, as a device intended to compete with the iPad, it didn’t take off.  Later, with the Kindle Fire announced, it became practically irrelevant.  Nobody is going to want to consider a tablet running twice the price of the most popular thing around unless it is truly amazing.

Now Samsung is coming out with the more realistically competitive 7” Galaxy Tab 2 and there’s reason to give it serious thought as a choice.  It isn’t amazing, but at $250 it also isn’t overpriced and the value is impressively high for what you pay.

The new Galaxy Tab 2 is slightly thinner and lighter than the Kindle Fire.  We’re not talking about the most powerful tablet on the market, with a 1GHz processor and 1GB of RAM, but it should do the job.  It comes with 8GB internal storage as well as an expandable memory slot that can allow for an extra 32GB.  As a perk, new users will get a free year of 50GB Dropbox storage. There are dual cameras, though the front-facing is mediocre at best and even the rear-facing isn’t anything to get excited about.  The Galaxy Tab 2 does run Ice Cream Sandwich (Android 4.0.3) and is the first Samsung offering to do so, which may be a draw for some.

Overall, we’re talking about something that beats the Kindle Fire point for point across the board in hardware specs.  That isn’t exactly exciting on its own, given that the Kindle Fire was never intended to impress in terms of raw power, but the fact that there aren’t really any missing features besides perhaps an HDMI slot is worth keeping in mind.  The screen is actually somewhat less clear than the Kindle’s, but not enough to get upset about.  The consideration is going to come down to hardware versus software and media.

If we’re going to talk about a Kindle Fire vs Galaxy Tab 2 comparison, we have to consider the overall experience.  The Kindle Fire, in addition to featuring a $200 price tag, a heavily streamlined UI, and integration with Amazon’s digital services, can take advantage of the Amazon.com movie library and the Kindle Owners’ Lending Library in a way that the Samsung tablet can’t.  Amazon has also proven more reliable about their firmware updates than Samsung, whose older customers still have not been able to upgrade to Android 4.0.  If these conveniences don’t weigh you toward the Kindle Fire then a 7” Galaxy Tab 2 might be exactly what you’re looking for.