There is essentially no competition to be found between the Kindle Fire and any imaginable Windows 8 Tablet at this time.  I’ve touched on this a bit here already immediately following the announcement of the Microsoft Surface tablet, but it’s come up in emails and various other places often enough since then to be worth revisiting.  They are catering to completely different needs, price ranges, and purposes.  I doubt this comes as much of a surprise to anybody, but let’s hit the high points again.

The comparison ends up being very similar to that of the iPad vs the Kindle Fire.  It is inevitable that people will compare them.  After all, they are both tablets.  Add to that the fact that they are both extremely popular and that each is backed by one of the biggest companies in the world right now and the parallels are too clear to ignore.  Stepping past the most superficial aspects gives us a much more meaningful understanding.

In the case of Windows 8, we’re looking at a tablet OS that is deliberately formed into something that could replace a laptop.  The Surface is the ideal example, as you would expect when Microsoft designed both hardware and software sides of things.  Users get productivity apps along the lines of a full Office suite, a well-integrated social media sharing system, and more.  If you could possibly want to do it on a tablet, or on a portable computing device in general, Windows 8 is probably somehow equipped for that. 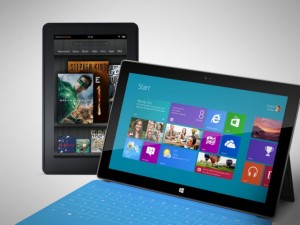 The Kindle Fire, on the other hand, doesn’t even come with full Android functionality.  It is an Amazon device meant for consuming Amazon media services.  You don’t get much in the way of access to third party programs.  Even media coming in from a non-Amazon source isn’t always supported as well as one might like.  I can recall a few occasions when the lack of a decent codec pack was problematic.  If a particular user’s situation demands it then they can certainly install some approximation of office apps and such, but the experience will be less than ideal and there is no way to significantly improve it.

There is a reason that the Kindle Fire is priced so far below things like the iPad and, presumably, the Surface.  You wouldn’t be wrong to guess that part of it is simply an inability to compete at that price point, but you wouldn’t be entirely right either.  Amazon is using the tablet in a different way and not even really trying to compete.

There will always be implicit comparisons.  Not only will they come up with the big names in the tablet market, but the Kindle Fire will forever be lumped in with the Android Market as people try to figure out who is doing well.  In reality, it doesn’t even belong there.  Their device is being sold cheaply, maybe even at cost even now, specifically because it doesn’t matter how much they make on the hardware.

Anybody who uses a Kindle Fire, however briefly, is a win for the company simply because they are then tied into the media network where Amazon is really interested in making their money.  They don’t want to make a tablet that can be everything for everybody, just to add a bit of incentive to choose them for any digital media needs one might have.