In the past several months, especially since the announcement of the Kindle Touch, I’ve mentioned regularly that I expected the Kindle Keyboard to be a thing of the past by early 2012.  While nothing concrete has happened just yet, there are beginning to be small indications that this is beginning to happen.

The most obvious early sign was the fact that the Kindle Touch’s 3G option did not include the same freedoms that we have come to expect in previous models.  Where up until now you could browse freely, albeit in a limited fashion due to the nature of the Kindle’s screen and experimental browser, now users are stuck with only Wikipedia and Amazon’s own store.  Given the size of the ongoing 3G bill that Amazon has to have been racking up over the past several years, this change should be no surprise.  Lifetime 3G for free is going to be hard to keep going without limitations.  What is surprising and makes this stand out is the fact that the Kindle Keyboard did not start having the same restrictions.  If this was really the direction that Amazon has chosen to go, the only easy explanation is that they were waiting to run out existing stock. 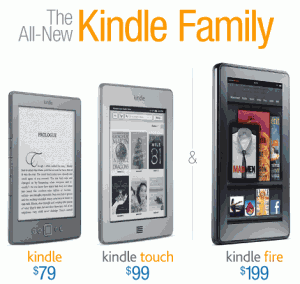 More recently, the Kindle Keyboard WiFi w/ Special Offers has silently disappeared from the Kindle Store.  You can still get the more expensive ad-free model, but somehow I doubt that is because Amazon has suddenly decided to drop their advertising subsidized eReader plans.  Not only is it gone, but the newer versions of the sales banner for the Kindle Family are now focused entirely on the newest devices and don’t display the Kindle Keyboard at all.

It would not be surprising to find that even more signs have been given that were just too subtle to be noticed at the time.  I seem to recall there being white versions of both WiFi and 3G Kindle 3 models, for example, but now that is only available for the 3G model.  Hard to say for certain at this point since the graphite frame was so appealing at launch that I didn’t bother picking up a white edition.

Will this be the end of eReaders with physical inputs?  Quite possibly!  The major competition has already moved to entirely touchscreen, though the Nook Simple Touch eReader still has some actual page turning buttons.  The virtual keyboard allows for a lighter, more compact device that is even less intrusive than previous Kindles.  I’m still dealing with mixed feelings regarding this move, having gotten used to my keyboard and not quite having had the same amount of exposure to the new design, but it does seem the way of the future.

If you are still interested in the Kindle Keyboard (formerly Kindle 3), now is really the time to buy.  Lefties will find it especially valuable since the Kindle Touch requires swiping if you want to flip a page forward with your left hand. It offers pretty much everything that the Kindle Touch does aside from X-Ray and the ease of use in highlighting and annotation, but you get the reassuring presence of buttons.  The option won’t be around much longer, I’m sure, but for now you can get either the normal Kindle Keyboard or the Kindle Keyboard 3G w/ Special Offers for just $139.

3 thoughts on “Kindle Keyboard 3G On The Way Out”