Say what you will about Windows 8 and the Metro style it introduces as a general computing option, it is amazing on a touch screen.  I’ve had a chance to play around with it more than a bit since the Consumer Preview build was released to the public a few weeks ago and after a short adjustment period I have had nearly no complaints.  There are obvious potential complications for the Kindle world, though since we can’t guess yet how inexpensive it will be possible for a full Windows 8 tablet to be, at best it is possible to make educated guesses about how portable device development changes in months to come.  What might surprise many people, though, is that just as Android has been used effectively to power E Ink reading devices like the Barnes & Noble Nook, Windows 8 has been mentioned as a possible operating system for future Kindle competitors. 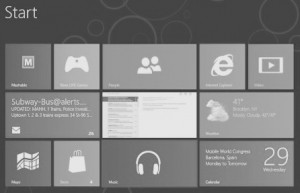 The goal has always been to create a consistent experience between every device that runs a version of the operating system.  If you’re using Windows then it doesn’t matter if you’re on a tablet, a desktop, or a smartphone, because they will all function effectively the same way.  Traditionally Windows has been seen as far too slow and overly large to be considered a cost effective way to handle a dedicated eReader, but this may be changing.  Since Windows 8 emphasizes speed, efficiency, and power consumption, it may well work perfectly to bring that distinct touch-centric Metro style to the reading world.

This wouldn’t be bad news for the Kindle platform, of course.  While Microsoft Is developing their own in-house app store to compete with that of Apple, there is already a Kindle for PC app to play with.  It seems fairly safe to assume that since Microsoft will not be allowing highly customized or restricted copies of their software to be shipped (unlike with Google’s Android), the Kindle app will remain open to anybody using these new tablets and eReaders.

While we’re still a long way from anything certain, especially since the launch of Microsoft’s new operating system is expected no earlier than October, we do know that representatives of the company have hinted at an interest in joining the eReader market.  They don’t build the hardware, so it might be quite a while before anything affordable comes along to demonstrate the potential of the Windows 8 option, but if a barebones copy of the software can be had cheaply enough to match existing prices then it might really shake things up.

Right now the Kindle is dominating the reading world.  None of the Kindle eReaders make use of Android, but the Kindle Fire and any number of competing eReaders do.  Microsoft would have to set prices so low as to shock many people if they really wanted to hope to compete with established products, but that doesn’t mean they won’t do so.  They are butting up head to head with Apple and are clearly trying to establish a competing ecosystem.  I don’t see them teaming up with Amazon to offer a dedicated Kindle Store option as an official counter to iBooks, but it’s inevitable that something is brought up to match practically every facet of iOS.  The Kindle might well be caught in the crossfire.