Kindle Touch at a glance

In case you are in a hurry or are not interested in the in-depth technical stuff you can just read though this brief review to get a high level scoop on recently released Kindle Touch.

Now lets take a deeper look at all o the aspects and features of Kindle Touch and how it compares to two other 6″ eInk devices – Kindle Keyboard (KK) and Kindle Non-Touch (KNT). I will refer and compare Kindle Touch (KT) a lot to these devices in the course of this review.

It is amazing how quickly we can become spoiled, especially when comparing things. Kindle 3 felt significantly lighter when compared to Kindle 2. Kindle 4 Non-touch felt like a feather compared to Kindle 3. As I hold all 3 current devices (Keyboard, Non-touch and Touch) and compare, I can clearly feel the difference in weight. Kindle Fire that also lays in front of me feels like a brick when compared to eInk devices. Yet the truth is that all 6″ eInk devices (and perhaps even 9.7 Kindle DX) are light enough not to bother you during prolonged reading. It takes reading for more than an hour on something as heavy as original iPad for my hand to go numb. According to Amazon Kindle Touch weights 7.8 with 3G modem and 7.5 without. My electronic scale actually put 3G version at 7.6oz. It seems like Amazon is systematically overstates weight of their devices starting from Kindle 3. To put this into perspective, Kindle Non-Touch weighs 5.9oz, and Kindle Keyboard – 8.5oz. Of course Sony PRS-350 is smaller and lighter still at 5.3oz but at a price of having a smaller screen.

As far as controls are concerned, 3 eInk Kindles have different control paradigms each of which has its pros and cons. Lets look at most typical eReader usage scenarios:

As you can see, the most frequent operation of flipping a book page is equally comfortable on all devices. In other operations, touch and keyboard perform on par with each other. So it’s really a question of what you will do more often. If English is a second language for you and you will frequent the dictionary than touch will have an advantage. If you annotate with text a lot, then keyboard rules the day. Non-touch device will give you some minor trouble even in such basic operations like finding a book by name (among 100s of other books in your archived items) but it pays back for this inconvenience in reduced size and weight.

As with Sony devices that pioneered eInk + touchscreen combo, there is a noticeable lag between finger manipulations and things happening on the screen. At first it seemed a little annoying to me but very soon I got used to it and stopped noticing it altogether. The convenience of selecting any word on the page by merely pointing at it is worth it.

The screen in new Kindle Touch is the same eInk Pearl that Amazon has been using since Kindle 3. It is also currently used by Sony and Barnes & Noble in their PRS and Nook devices. It features resolution of 600 x 800 pixels and can display 16 shades of gray. It has higher contrast compared to older generations of eInk and quicker refresh time.

Although some people on forums claim that screens look different, I tend to disagree. I’ve measured all 3 screens with colorimeter that is normally used for printer calibration and found the measurements to be close enough. Small discrepancies can be attributed to normal screen quality variance, different screen age and wear and minor measurement errors. The difference is so small that it wouldn’t be noticeable to a naked eye. This graph shows measurements of the L component of Lab color for 16 shades of gray, with “0” being total black and “15” being “total white”. “L” component is indicative of the brightness and disregards color information. “a” and “b” components were close to zero indicating almost neutral gray color with a slight greenish tint.

Touch interface is implemented by infrared sensors located on the edges of the screen. This way nothing is overlayed on top of eInk avoiding low-contrast disaster that resistive tochscreen film caused in Sony PRS-600. IR touchscreen attributes to a slightly thicker bezel around the screen. I’m guessing that to conserve battery power, IR transmitters light up only few times a second until user touch is detected and then sampling frequency is increased. This can explain why there is a lag that is longer that can be attributed to eInk refresh speed and why very quick taps on the screen can be ignored by the device altogether (though not always).

Although if you rotate your Kindle around you can find an angle at which fingerprints will be clearly visible, they are not during normal reading. So this is not a problem (for me at least)

All-in-all eInk + Touch combo is not perfect but it does provide added convenience over keyboard and even more so over the lack of keyboard in non-touch version.

Given my past experience with Kindle 4 dis-assembly (and how it turned out to be irreversible) I’m going to put off taking Kindle Touch apart to see what is inside, including the battery. Based on the device weight and claimed battery life, I’m guessing that it would have the same capacity as in Kindle Keyboard or more to accommodate for infrared touch screen power use. However I suspect that it might be of the same soft-case, glued-in non-replaceable kind as in Kindle 4 Non-Touch. My second Kindle Touch is scheduled to arrive on November 22nd and then we’ll know.

Just as in Kindle 3, Kindle Touch features unicode font support enabling users to read texts in non-latin languages such as Russian, Japanese, Chinese, Korean, etc. No hacks are required. I did some quick tests and confirmed that Russian and Japanese Hiragana definitely work. If the language you need is not supported you can always bypass this limitation by saving the document as PDF that has all of the fonts embedded. 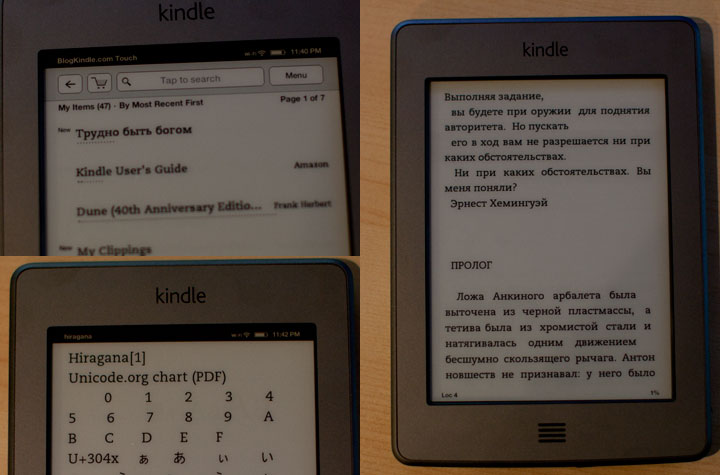 When reading books, Kindle Touch allows you to configure the font. You can select from:

Using large fonts can be a great help for readers with impaired vision.

According to “Device Info” section in “Settings” my Kindle Touch currently runs software version 5.0.0 (1370280073). Kindle Keyboard currently has software version 3.3, and Kindle Non-Touch has 4.0.1. While there is little in terms of visible differences between 3.x and 4.x branches of Kindle firmware, unsurprisingly version 5.x looks like a major overhaul since it had to accommodate a whole new paradigm of touch interface. But changes in the software go beyond just touch. Some existing features were changed and several new ones were added. Here’s  a scoop of what I’ve found so far:

One of the areas that was reworked in Kindle Touch is PDF file support.

Kindle finally added support for internal and external PDF hyperlinks. So things that were clickable in Adobe Acrobat Reader on PC are now clickable on Kindle. PDF documents became much easier to navigate. Another welcome addition was added support for structured table of contents that Adobe Acrobat normally displayed as a “tree-structure” to the left of the document. Kindle displays it as a flat menu. Again it makes documents easier to navigate. In the past one had to rely on search or “go to page…” command.

These commands are still there and work well.

Unfortunately landscape viewing mode is no longer there which makes documents that were designed to A4 or US Letter paper size very hard or impossible to read without zooming. Pan and zoom is controlled by multi-touch as one would expect, but it is not as convenient as switching your 6″ Kindle into landscape mode and paging though the document. With Kindle Touch, once you zoom in, you loose the ability to flip pages (need to zoom all the way out first). Panningg is reasonably fast due to the fact that the viewer updates only half of the pixels on screen and even those in 2-color mode. Once you stop panning a full page refresh follows to eliminate ghosting and display the image in full quality.

Found in UR, Frank Herbert’s Dune (though not “Dune’s Messiah”).

This was one of the highly-advertised features during the Kindle Touch reveal back in September. It lets you browse though characters and concepts in the book and see where they are mentioned. The feature is based on shelfari Amazon community encyclopedia. Currently it is only available in a very limited selection of books. After randomly checking a few dozen of books in my Kindle library I found it working in Stephen King’s “UR” (that was written specifically for Kindle) and Frank Herbert’s “Dune”. What is interesting that it didn’t work in “Dune’s Messiah” which is a sequel. I found it funny that one of the entities in the “Dune” book was “New York Times” due to the fact that it was mentioned in the afterword. While technically this is correct, it is a bit misleading. 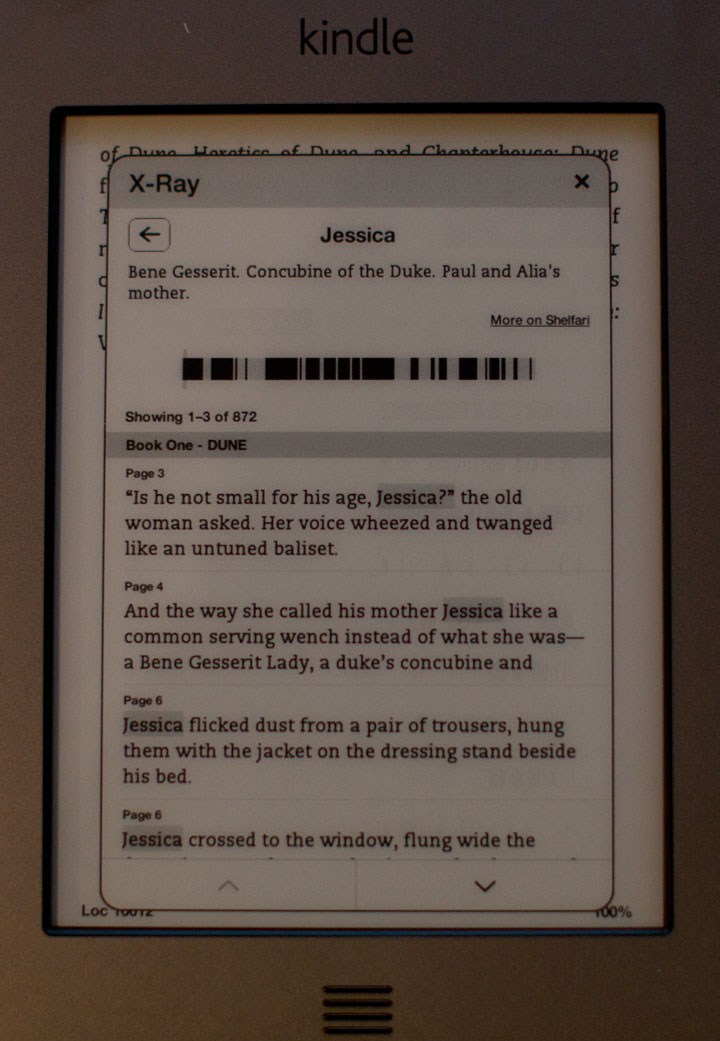 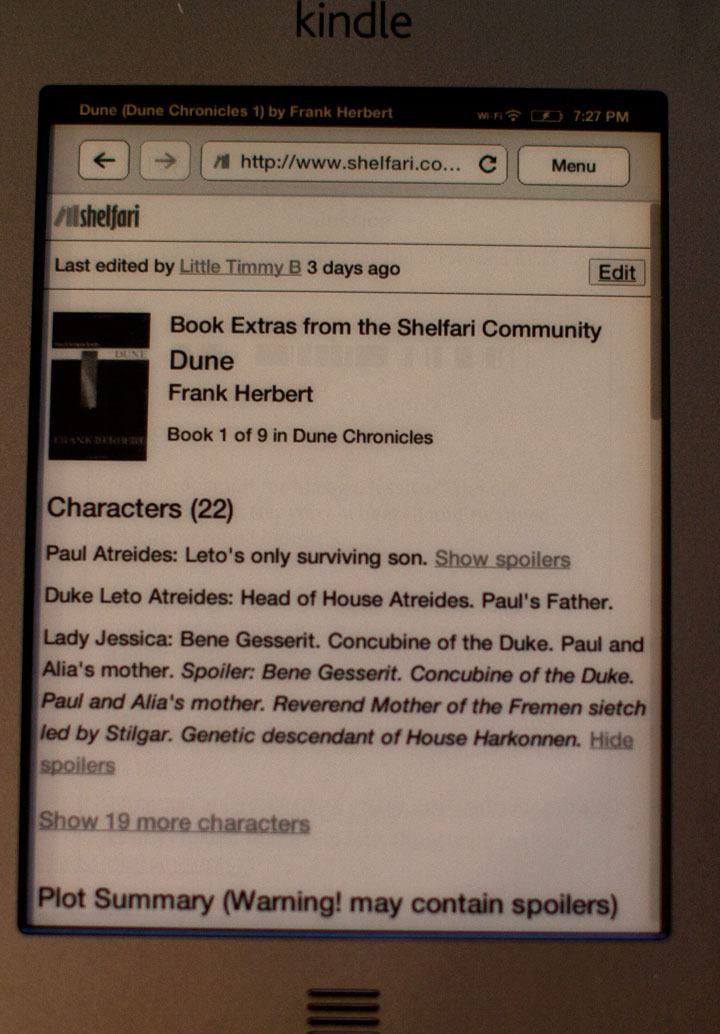 Kindle has supported apps for quite a while. With introduction of Kindle Non-Touch and Kindle Touch, application market has split. Since Kindle Keyboard has been around the longest, most if not all Kindle apps work on that device. On the other hand, most currently do not work on Keyboardless devices due to poor user experience or complete inability to control the app without keyboard shortcuts.

So each individual app may or may not run on every type of Kindle device. With time app developers will update their apps to support as broad range of devices as possible buy meanwhile you can enjoy playing Number Slide on Kindle Touch.

All-in-all, Kindle Touch is another solid eReading device from Amazon. Although previous incarnations of Kindle were already quite good at their main purpose, which is reading books and newspapers. That being said, touchscreen interface still does add some value even if to keep the device usable while making it smaller and lighter. As I was typing this review (more than 3000 words as it turned out), 23 user reviews were already posted on Amazon, more than half of them are 5-star reviews.

With purchase price of $99 (though I’d recommend making a one-time $50 investment to get lifetime free 3G) Kindle Touch provides great value (especially considering the ability to get books for free from library (either your local one or Amazon Prime). If you will find sponsored screensavers annoying, you can always pay $30 that you saved during the initial purchase to amazon to have them removed.