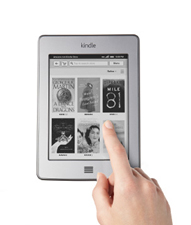 While I’m mostly a fan of the Kindle Touch, I’ve largely seen little reason to upgrade from the Kindle Keyboard in day to day use.  The darker frame is nice, the keyboard works well for any shopping I have to do, and it has generally proven reliable for quite some time now.  Since I knew I would be on the road for about a week recently, however, I decided I would give the Kindle Touch a thorough test.  You never know what you might learn by trying, right?

One thing that surprised me was that I was generally able to get a better 3G signal through the Kindle Touch than through my Kindle Keyboard.  The Keyboard model is definitely far more broken in, so I can’t necessarily count this as a side by side comparison of new devices, but I was able to get more reliable, faster connections at nearly every stage of a 3,500 mile trip with the Kindle Touch.

I expected that the lighter case on the new Kindle Touch would be a pain compared to what I was used to.  This was somewhat accurate.  While reading in the majority of indoor lighting situations was fine with either eReader, I noticed that it was much easier to use my Kindle Keyboard in bright sunlight.  I’m sure this was an optical illusion rather than actual quality differences, but the lighter frame around the screen left the Kindle Touch looking washed out in truly bright light.

Quite frankly, I love the physical page turn buttons.  I still get annoyed at Amazon for removing them.  That is literally my only complaint about the general reading experience on the Kindle Touch, though.  It is quick, light, easier to hold, and generally everything you want in a reading device.  The preference for physical buttons aside, I will admit that after a few page turns I stopped noticing that I was having to touch the screen and things moved quite naturally.  This could be a matter of my own preconceptions as much as anything.

The place where I really appreciated having a touch screen was in PDF navigation.  Things went much more smoothly than I’m used to.  The same is true of in-line annotation in Kindle documents.  While it is slightly faster to type on the physical keyboard, that advantage is negated by the fact that the Kindle Touch allows for quick placement of your cursor rather than a slow movement via 5-way control pad.  The point here has to go to the Kindle Touch on both issues.

You can’t really complain about the battery life on any Kindle product.  I used each of my Kindles for about 4 hours per day across a seven day period.  They both still had just under half their batteries left when my drive was over.  The charger that was packed could have easily been left at home.

My Kindle Touch is going to be seeing a lot more use.  The lighter weight and smaller form made it stand out in a lot of ways and the fact that note taking was so much faster than I expected has persuaded me to make this my daily eReader.  There are still many reasons to prefer the Kindle Keyboard, the keyboard among them, but it is not as clear a choice as I had expected.  I will try to follow up on this in a few weeks to see if extended use is still preferable when both are available.