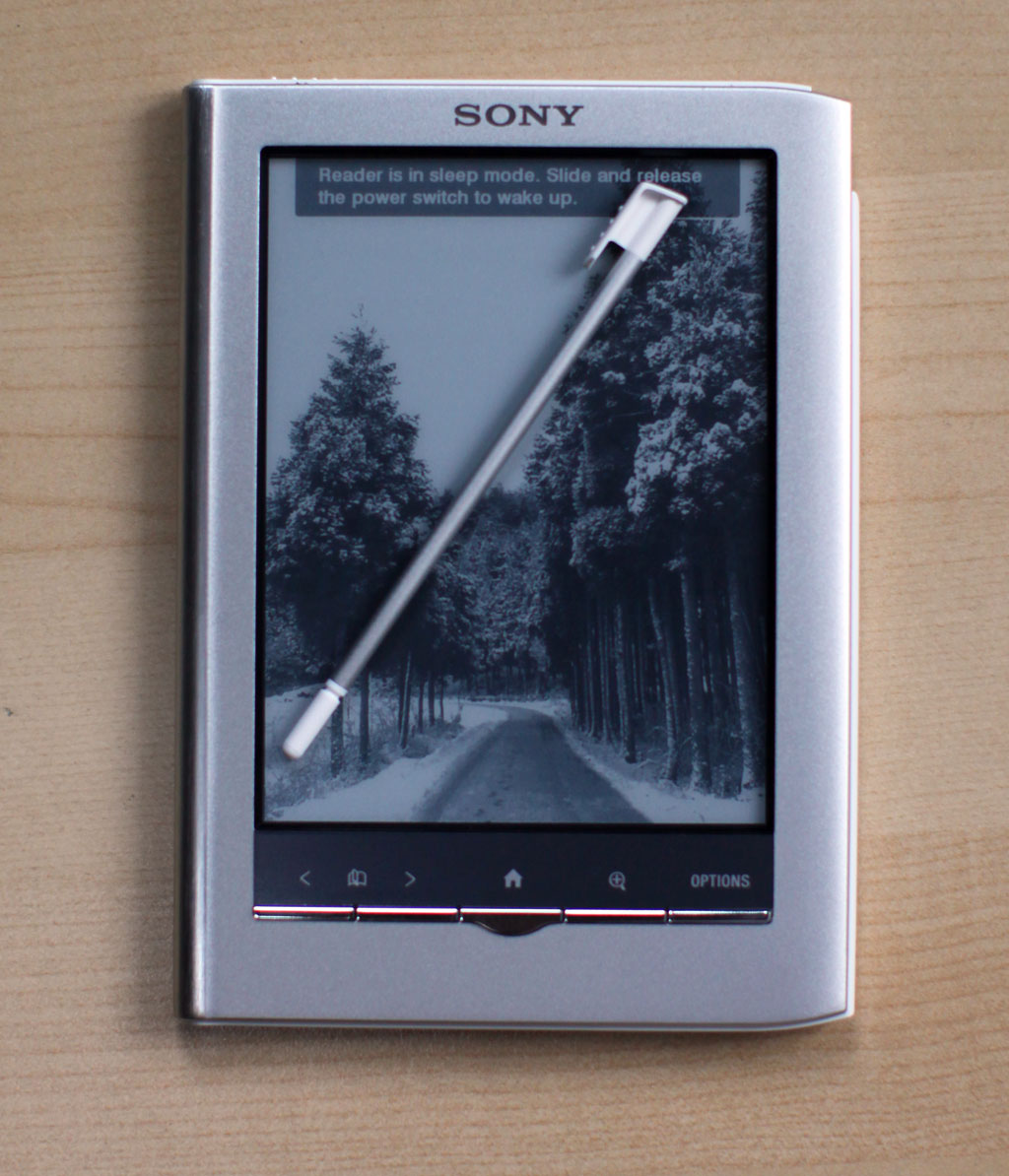 During the 2010 Black Friday sales I was able to purchase Sony PRS-350 Pocket Edition (NYSE:SNE) from Dell (NASDAQ:DELL) for $130 which is $20 less than what it usually goes for. After playing around with the device for a while I decided to put together this review. While I mostly use Amazon Kindle (NASDAQ:AMZN) personally, I’ve also interacted with Nook, previous Sony eBook readers, namely PRS-505 and PRS-600 Touch as well as Apple iPad/iPhone, Android apps. I’ve been quite unhappy with several features of Sony eReaders and it was very interesting for me to see if these features were fixed.

First of these shortcomings was the fact that you couldn’t do anything with the reader while it was charging via USB cable. You could read if you purchased optional AC power adapter but not otherwise. Sony PRS-350 doesn’t have a dedicated charging port. In fact the only connector it has is micro-USB that can be used for transferring books from your PC and charging. Unlike Kindle you still can’t read while charging from your computer. You can read when charging via PRSA-AC1 wall AC adapter. However this adapter costs an outrageous (some something this simple) sum of $30 and is quite bulky compared to similar AC-to-USB adapters for iPhone or Kindle.

Not wanting to add to the army of such adapters I already have at home (especially for $30 a piece) I tried first several power adapters that I could dig up – namely from Apple iPhone 3G and Amazon Kindle 3. Sony reader treated the Apple adapter just a computer – it went into “USB Charging” screen that I couldn’t get out of. But it responded much better to Amazon Kindle adapter – the red charging light lit up and the battery began charging. Conclusion: To keep reading while charging the battery on Sony PRS-350 you either to buy a power adapter from Sony or find a compatible one since it seems that not all USB charging adapters are created equal. 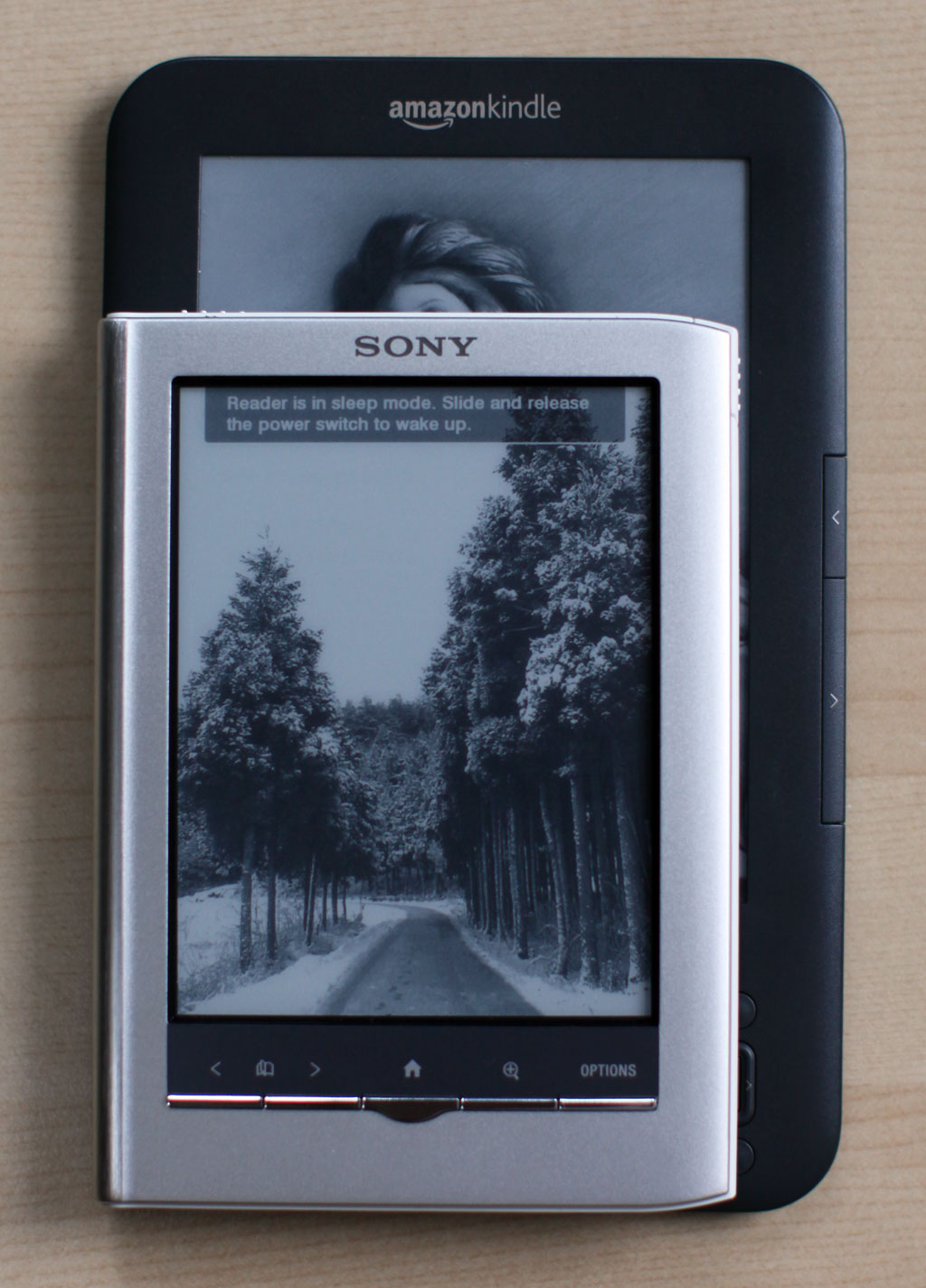 As far as ergonomics go, Sony PRS-350 is much smaller and ligher than Kindle 3 due to smaller screen and lack of keyboard. It will easily fit into most shirt pockets where Kindle would not. PRS-350 is comfortable to hold in hand and paging buttons are easy to use. So ergonomically it wins over Kindle.

PRS-350/650/950 are Sony’s second attempt at building a touchscreen eReader, PRS-600 being the first one in 2009. In PRS-600 resistive touchscreen layer was overlaid over eInk display. While this approach works well with backlit LCD screens, with reflective eInk it produced a display with very poor contrast ratio (see comparison with Kindle 3 and 2). This was reported the most significant weakness of the device by both consumers and reviewers. In PRS-350, Sony used infrared touchscreen technology that doesn’t require anything being put on top of the screen. As a result, Sony PRS350 features latest generation high-contrast Pearl eInk screen in it’s full excellence same as Kindle 3.

Screen in the Sony device has the same number of pixels as its Amazon counterpart, but one inch smaller diagonal. This results in slightly crisper but smaller images and text.

So of the things that were covered in todays review:

All-in-all, devices are tied right now so unless you intend to carry your eReader in ultra small purse where Kindle just would not fit.

To fully evaluate the device I’m going to read Princess of Mars by Edgar Rice Burroughs on it and report on how it goes. I’ll also do some in-depth PDF support testing.