It was recently announced that Kobo, Amazon’s leading competitor against the Kindle outside the United States, is offering a fun new perk for anybody who picks up one of their eReaders between now and May 2012.  The new Kobo Book Club, as they are referring to it, will offer each person a book of their choice from a limited selection once each month through the end of 2012.  As with what seems to be the competing program, Amazon’s new lending library, the available books will not necessarily be off the bestseller list, but they will be permanent acquisitions instead of just rentals. 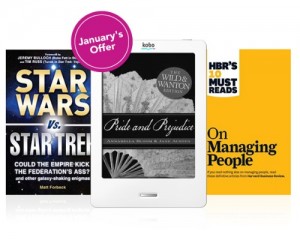 Amazon made a bold move when they launched the Kindle Owners’ Lending Library.  It took long enough to even get the public library system compatible with the Kindle in the first place, thanks to the break from EPUB early on in Amazon’s eReading endeavor.  Even that comes in the middle of the long fight publishers have put up against eBooks being in any way cheaper or more convenient than their paper counterparts, but that’s another story entirely.  What’s most relevant, especially if we’re talking about somebody like Kobo trying to come up with a similar program is the reaction.

In a lot of ways that program is Amazon flexing their muscles.  Yes, the lending library benefits Kindle owners and is something that I totally support, but starting it up without general publisher or author support and working around that problem by taking advantage of wholesale discount arrangements has led to a bit of drama.  The Big 6 are upset, since it means that eBooks are yet again in danger of being found more convenient and less expensive than print books.  The Author’s Guild has lent support to that side of things as well.  It’s doubtful that any of this will cause Amazon to back off, but not many other companies would be in a position to get away with a similar move.

Kobo has avoided the problem entirely with their choice of titles.  January’s titles, for example, will be:

Glancing at Amazon these seem to be well-rated titles, but you have to admit that the audience likely to get excited about them will be limited.  If this marks the beginning of an ongoing trend, it’s hard to see this as a major draw for new customers despite its being available in Canada as well as the US.

This is especially true since buyers who go for the new Kobo Vox aren’t included.  Many people are expecting the Vox to make a big splash by beating the Kindle Fire to new markets, and Kobo clearly rushed to get something out there in time to compete, so this exclusion is rather hard to understand.

While I wouldn’t exactly say that this should be a huge factor in any eReading platform choices, it’s nice if you were planning to go that route anyway.  Kobo is currently the third most popular eReader platform around, so clearly the demand is there.  An occasional extra can’t hurt, even if it doesn’t really provide exactly the same value as the Kindle counterpart.