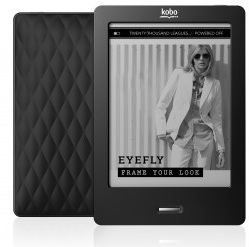 While the Kobo eReader has had trouble gaining much traction against competing Kindle and Nook options, it continues to be a comparatively strong presence in the eReader marketplace.  This is especially true in international markets where Amazon has not yet managed to secure the same sort of market dominance that it enjoys in the US.  In an effort to keep up with the recent Kindle and Nook price drops, the Kobo Touch eReader had been brought down to as low as $99.

Of course, they accomplished this by using Amazon’s own methods against them.  This newer, cheaper version of the popular touchscreen eReader will only be available at the $99 price point by offering advertisements.  This is obviously no different from what has been done before with the Kindle, but it is especially interesting in that Kobo is the first company to attempt to make use of Amazon’s eReader ad revenue stream model.

The major question right now will be in how they implement it.  Since none of the new Kobo models have shipped just yet, we have no way of knowing precisely where these ads will be placed aside from in screensavers.  Any time the device is powered off or in sleep mode, the owner will be treated to a sponsored special offer.  No major imposition there.  The tricky part is that Kobo also lists ads in “other discreet places” without clear definition of where these will be.

I think it is safe to say that none of these ads will in any way interfere with the reading experience.  Not only would that better adhere to Amazon’s already successful model, but Kobo as a company has always maintained that it is interested first and foremost in the reader.  Nobody would be particularly happy at this stage if they had to read ads inside their books.  That does not preclude throwing up half-screen banners or pop up windows that need to be closed to proceed throughout the menu navigation, though.  We can hope that these will not be present, but the company does not have quite the clout that Amazon brings to the table and may need to concede a bit to get advertisers interested.

While it can be a touchy issue to bring advertising into something like this, especially in an environment where publishers are desperately afraid that customers will start perceiving eBooks as an affordable alternative to paper printings, if done right it can reduce costs significantly.  There is every reason to expect that within the next year or two we will be seeing Kindles priced so low as to make it almost silly not to own one.  They might even be free, under the right promotion.  If this takes place, the competition will have no choice but to follow suit or drop out. Considering how tactfully Amazon has managed to include ads on their eReader line, making many owners including myself wish that it were possible to ad the adds to older Kindles, there is no reason not to join in so long as a similarly low key approach is employed.

The new Kobo Touch with Offers will be shipping in 2-3 weeks.