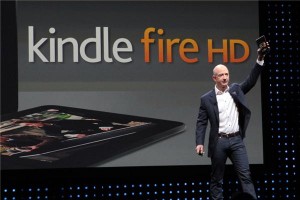 As I write this, Jeff Bezos is on stage in Santa Monica, California presenting the newest developments in the Kindle product line.  It’s been greatly anticipated the last several weeks and this is the time to learn what all the fuss has been about.

The first reveal of the day was the update to the Kindle eReader.  The newest version of this Kindle is known as the “Kindle Paperwhite”.

The biggest appeal of this product is, as might be expected, improved screen technology.  The Paperwhite has sharply improved contrast that everything crisper.  Text will stand out more sharply than has been the case in other models as a result.

It also boasts a greater pixel density than previous models.  The Kindle Paperwhite’s screen has 212 pixels per inch, up from the last generation’s 167ppi.

Rather than the three font options that we’ve had access to before, the new model will have six.  New additions include Palatino, Helvetica, and Futura.

Battery life is still the same, offering up to 8 weeks of uninterrupted use.

Most importantly, the Kindle Paperwhite will have a lit screen, despite rumors about supply line issues.  The light source is placed on the bottom edge of the screen itself and appears to do a great job of spreading illumination evenly across the display area.

As always, this new eReader will be thinner and lighter than previous models.  As Bezos put it, “It’s thinner than a magazine, lighter than a paper”.

The new Kindle Paperwhite will be just $119 ($179 for the unlimited 3G model) and will be available in October, though preorders will begin immediately.  The basic Kindle will also be getting a screen upgrade and a price drop to just $69.

In other Kindle hardware news we get the new updated Kindle Fire.

The replacement for the existing Kindle Fire will be 40% faster than its predecessor.  Battery life has been extended a vague but apparently significant amount.  The price has also dropped to just $159.  It will be available on September 14th, explaining the sudden lack of Kindle Fires in the Amazon store this week.

More importantly, we now know about the Kindle Fire HD.  This will come in two sizes, as many had hoped.  The newer, larger Kindle Fire will be 8.9” and have a 1920 x 1200 resolution.  Not quite as large as the iPad, but definitely moving in on Apple’s territory.

Both versions of the Kindle Fire HD will have stereo speakers to replace the mediocre sound quality of the first device.

They will also have greatly improved wireless connectivity.  Anybody who was following the first Kindle Fire launch will remember that the device ran into trouble on many networks.  This time around it will have two antennas, work on the 5GHz band, and have over 40% faster speed than the iPad’s wireless.

There will also be a $499 Kindle Fire HD that has 4G LTE cellular connectivity.  This model will have 32GB of storage space and the data plan associated with it will run $50 per year.  That meets one of the community’s big demands for the new model, so we will see how widespread adoption is.

Depending on how performance holds up in actual testing, and it seems to be impressive based on presentation alone, the Kindle Fire HD might just have what it takes to build Amazon up well beyond even the 20%+ tablet market share they claim to currently enjoy.

Stay tuned and we will keep you up to date on all the latest news related to this launch.