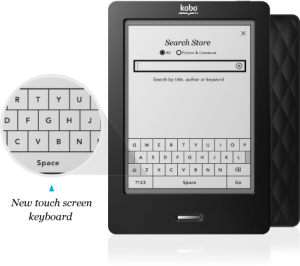 So far the big contribution that the Kobo has made to the eReader marketplace, in my opinion, is spurring the more established and easy to use eReaders like the Kindle and Nook into an abrupt price drop.  The Kobo hit stores at $150 at a time when a decent eReader would cost you somewhere around a hundred dollars more than that no matter which one you went with.  It made a big difference, even if the Kobo itself was so basic and clunky to use that it didn’t make a huge splash in terms of usability.  Now, with their first major hardware upgrade, the Kobo eReader is back in the race.  The new Kobo is a lot easier on the eyes and promises to be more than a little bit simpler to use.  The big question is whether or not it is enough of a change.

In a lot of ways, the new Kobo Touch is the same concept as the new Nook.  You’ve got a 6″ E Ink Pearl screen, a Home button, and a nicely dark frame.  Lots of visual similarities.  You also get a WiFi connection, though it only works to go to the Kobo Store.  The touchscreen seems ok, and they avoided the blurriness issues that arose in Sony’s touchscreen eReaders by going with a touchscreen technology that does not involve an extra screen layer.  You even get a fair amount of internal memory and an SD slot to work with.  Really, though, it seems like something is missing to be really competitive here.

Leave aside the Kindle comparison for the moment to focus on the more directly comparable new Nook.  Yes, there is a $10 price difference, but consider what is being sacrificed for that money.  Both devices have EPUB support and work well with libraries, by all accounts.  The Nook is supposedly pushing 60 days of battery life these days compared to the new Kobo’s 10 days.  You only get two font sizes to choose from on the Kobo.  You won’t be getting apps of any sort, from what I can see.  Even the size isn’t considerably smaller in any way.

The one place where the Kobo might make a splash is in its social networking service.  Amazon’s Kindle has done a bit along these lines and it wouldn’t surprise me to see the Kindle Tablet do more when it comes around, but so far I would say that the Kobo’s Reading Life is a lot more elaborate.  Up until now, to the best of my knowledge, this feature has only been available through iOS and Android apps rather than as a part of the Kobo eReader itself.  It tracks reading time, page turns, books completed, hands out awards for having read books, and more.

Will the novelty be able to clear a spot near the top of the eReader market for the Kobo?  Probably not.  Keep in mind, however, that there is room for variety.  This is probably the third best eReader brand out there right now as far as the price to features ratio is concerned.  There might very well be a place for it even with the Nook and Kindle holding what are in my opinion deservedly superior positions at the moment.