Each week we bring to you the New York Times best sellers list. We go through the list and give you our top 3 picks so to give you an an idea of what to download for your Kindle or just to buy for your bookshelf.

Hardcover Fiction
Top 5 at a Glance
1. T IS FOR TRESPASS, by Sue Grafton
2. THE DARKEST EVENING OF THE YEAR, by Dean Koontz
3. FOR ONE MORE DAY, by Mitch Albom
4. DOUBLE CROSS, by James Patterson
5. A THOUSAND SPLENDID SUNS, by Khaled Hosseini

Hardcover Nonfiction
Top 5 at a Glance
1. I AM AMERICA (AND SO CAN YOU!), by Stephen Colbert, Richard Dahm, Paul Dinello, Allison Silverman et al.
2. BOOM!, by Tom Brokaw
3. BORN STANDING UP, by Steve Martin
4. AN INCONVENIENT BOOK, by Glenn Beck and Kevin Balfe
5. CLAPTON, by Eric Clapton

Paperback Trade Fiction
Top 5 at a Glance
1. THE PILLARS OF THE EARTH, by Ken Follett
2. LOVE IN THE TIME OF CHOLERA, by Gabriel García Márquez
3. WATER FOR ELEPHANTS, by Sara Gruen
4. THE KITE RUNNER, by Khaled Hosseini
5. ATONEMENT, by Ian McEwan

Paperback Mass-Market Fiction
Top 5 at a Glance
1. BLOOD BROTHERS, by Nora Roberts
2. I AM LEGEND, by Richard Matheson
3. NEXT, by Michael Crichton
4. FURY, by Aaron Allston
5. CROSS, by James Patterson

Paperback Nonfiction
Top 5 at a Glance
1. EAT, PRAY, LOVE, by Elizabeth Gilbert
2. THE INNOCENT MAN, by John Grisham
3. THREE CUPS OF TEA, by Greg Mortenson and David Oliver Relin
4. INTO THE WILD, by Jon Krakauer
5. 90 MINUTES IN HEAVEN, by Don Piper with Cecil Murphey

The Darkest Evening of the Year: Number 2 on Hardback Fiction 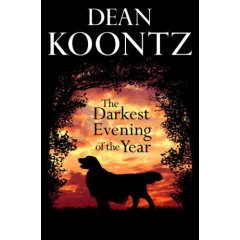 And soon thereafter, Amy discovers that she is being followed.

The power of this novel lies in the genuine compassion that Dean Koontz exhibits through Amy and her love for and near obsession to rescue both people and dogs from abuse and neglect.

If there’s a weakness to this novel it’s that Amy can come across as unintentionally self-righteous and holier than thou.

Regardless, it’s clear that Dean Koontz is a mature writer, and his desire to bring together the suspense-writing strengths of his early career with matters close to his heart are on full display in The Darkest Evening of the Year.

This novel contains a couple of plot twists that are really, really cool, and the textured layers of the characters, their multiple names and the depths of their backgrounds indicate that Koontz is onto something profound in this novel…. namely the existence of a soul and how that soul transmits through multiple lives.

This is a profound novel from a writer who has mastered the elements of suspense, and I cannot recommend it highly enough.

I Am Legend: Number 2 on Paperback Mass-Market Fiction 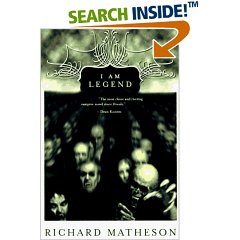 I am Legend is arguably the greatest short horror novel ever written, and its influence on the horror genre has been profound. Stephen King and many other of today’s masters rank this book highly in their personal top ten lists of favorites. It is a short novel that can be read in one sitting; it is hard to put down, building in intensity from start to finish. Matheson creates an entirely new type of vampire fiction herein. Transcending the traditional vampire tale, he adds science fiction elements to produce a refreshing new interpretation of Stoker’s legend. The most fascinating part of the story is the protagonist’s (Richard Neville’s) attempts to explain the legendary aspects of the vampire myth in scientific terms. His discovery of a bacterium, which he dubs vampiris, as the true source of vampirism struck me anew reading the novel again after the events of September 11, 2001. Although we only get pieces of the story regarding the outbreak of the vampiric plague, including a reference to bombings, it can easily be seen as the fruits of germ warfare. Neville even conjectures that the Black Death of the Middle Ages was caused by this same vampiris germ, and he extrapolates facts and ideas from that history in his attempts to understand why such defenses as garlic, crosses, and stakes driven into the heart actually are effective against the hordes of undead creatures menacing his own time. He studies academic texts and conducts experiments with the blood of these creatures, which is the means by which he identifies the bacterium. The essence of garlic has no effect on the germ when injected into a blood sample, which initially he is unable to explain, but he later is able to explain garlic’s effectiveness. Less scientific tests lead him to conclude that crosses are only effective against “Christian” vampires; the cross has no meaning to for vampires who were once Jews and Moslems, but sacred symbols of those religions, such as the Torah and the Koran, do. All of these scientific tests and speculations are just fascinating.

Neville is essentially the last man on earth, and the loneliness of his situation is the central part of the story. Matheson is able to communicate Neville’s emotional feelings vividly, making him very real. We gradually acquire the story of the deaths of Neville’s wife and daughter, essentially experiencing the pain he goes through when these memories overcome him. We watch him drink himself into a stupor as each night finds him besieged in his fortified house, surrounded by vampires, including his old friend and neighbor, calling for him to come out. We watch him slowly lose his grip on sanity and come very close to giving up. Then, however, we watch him overcome his depression and courageously fight to live in the nightmare world he is trapped in. The scenes with the dog he finds are full of emotion and really gripped this reader. This is Neville’s first contact with nonvampiric life, and his attempts to befriend and help the poor creature (at the same time finally finding a companion) touched me greatly and brought tears to my eyes. His eventual discovery of another human being like himself is also powerful and emotional, although to speak more about this aspect of the story is to risk giving something away to the future reader.

This is a story of one man overcoming all obstacles and fighting to defend his way of life and his very humanity. The novel deals with the human condition, the essential ingredient to effective horror writing. Neville struggles constantly with his doubts and fears, particularly as he commits acts that he would have condemned as barbarous in the time before the plague. His needs for companionship of any kind offer us a clear image of the inner soul of man. By the end of the story, he does indeed become legend, both in his world and in ours.

The Dangerous Book for Boys: Number 1 on Hardcover Advice 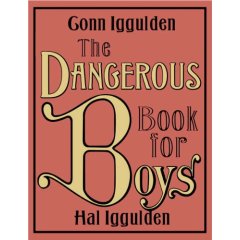 I have to write, primarily to disagree with Mr Mitchell.

This may not be the greatest book ever, but it fills a huge hole, and I for one look forward to Volume II.

I and a friend, when we were about 10, made a go-kart just like that described, and the paper aeroplane detailed in this book comfortably beats my previous “favourite design”, (gleaned from a Rupert Annual many years ago). You learn something every day.

It’s a great book and while learning bits of Shakespeare won’t be to everyone’s taste, there will be something – many things in fact – that WILL be to everyone’s taste. I bought my copy on impulse in a book shop for £18.99, I’m here buying another for the 50+ year-old friend with whom I built the go-kart all those years ago! :-)

If you have kids, or grandchildren, or godchildren (or simply remember being one yourself) buy it!