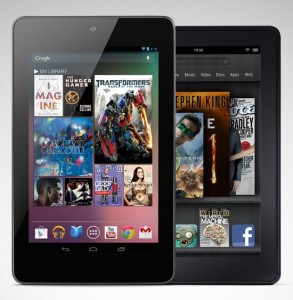 Hardware specs aren’t everything when it comes to tablet performance.  If they were, the Kindle Fire never would have gotten off the ground.  Still, the Nexus 7 from Google is far enough ahead in that respect that if you are buying a $199 tablet right this second the choice is clear.  People invested in Amazon’s ecosystem, or interested in choosing what is quickly becoming the leading provider of digital media, will still grab the Kindle Fire.  Everybody else would want the Nexus 7.  It is just better at being a general purpose tablet.

This doesn’t mean that Google has won, though.  They are in the lead for the moment, but we have months before sales spike again and in the meantime Amazon will be releasing their new hardware.  Even if it doesn’t stand out as completely superior to Google’s device, the next Kindle Fire will draw a crowd for any number of reasons.  Nothing else in the Android market has managed to compete on the same level so far and it isn’t just because Amazon dropped prices.

There was a time when I would have predicted that Google of all companies would be quick to adapt to the competition.  The delays surrounding the Nexus 7’s release tend to indicate that this is not the case.  The company had trouble getting the power they needed to make this an ideal showcase for Android 4.1 while also keeping the price down at $199.  With Amazon clearly being willing to subsidize their hardware to bring in media customers, that price will almost certainly not be rising.  The Kindle Fire’s hardware will be improved nonetheless, though.

Right now, as I said, it is a clear choice.  If you truly want a tablet right now and can’t afford to wait, the Nexus 7 is the best thing on the market and you will not be disappointed.  Nobody else is going to release such an affordable yet functional general purpose Android tablet right now.  By the end of the year things will be more chaotic.  Customers will be facing holiday choices involving not only Kindle Fire vs Nexus 7 or Android vs iOS, but Everybody vs Windows 8.

All of the hardware looks like it is going to be impressive and tablet sales numbers are expected to be higher than ever.  Google will have had their tablet in peoples’ hands for longer than any of the major players besides Apple by that point.  It allows a lot of time for interest to have cooled in the meantime.  They are rumored to be trying to offset that by scheduling a later release of the Nexus 10, but the same rumors mention setbacks due to manufacturing difficulties so that may be off the table for a while.

Realistically, I think it is fair to say that Amazon will continue to be a major player (possibly THE major player) in Android tablets for the indefinite future.  The only thing they really have to worry about is the downfall of Android if Windows 8 tablets take off.  Google’s devices are going to be better at running stock Android builds, but Amazon has never tried to pass the Kindle Fire off as the most powerful device on the market.  As long as they can keep the comparisons from going too far in favor of the competition, the integrated media services will carry the sales.