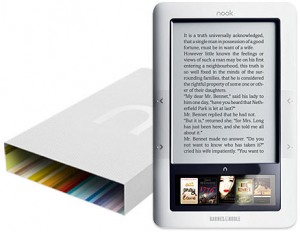 The Banes and Noble Nook eBook reader got updated just before Christmas. So those lucky(?) souls who got theirs delivered before or around that time were able to update their Nook for a comparatively nicer time reading eBooks on their new eBook reader on Christmas. But has the update made the Nook into a killer product, the answer sadly is a no. It still has some time to go before it can threaten established players like the Kindle.

In fact, even according to some official words form B&N this wasn’t anything major. They were simply testing things out with their very first over-the-air update for the Nook. Other than allowing a “seamless” access to the   B&N store providing exclusive content for the Nook, it also improves on the core speed and performance. That basically means it fixes the things that were slowing the Nook down noticeably. This should also cut down on the number of complaints that we were getting to hear about the Nook.

The Nook was already overbooked and supply was low much before Christmas. So most people who wanted to buy and/or gift eBook readers went for the Kindle or the Sony Readers. So the holidays have not made Nook the overnight sensation that some thought it would become. However, do not get me wrong on this count. The Nook is actually a very promising device and if B&N can play it right they are in for really good business. The Nook’s secondary color touchscreen might make more of a difference than originally expected. Plus, the Android factor also works to make it a very powerful device that is also flexible enough to accept radical new features that weren’t thought of before. So hopefully we will see this morph into a really good eBook reader that is different from all the rest.