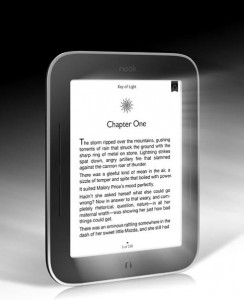 The ranks are closing in on Amazon and the Kindle.  Barnes & Noble is currently holding a Mother”s Day Sale on the Nook Simple Touch basic model, and the Nook Color.  This is apparently a push on its the less popular models.  The sale ends May 12.

Most e-reader fans are more intrigued by the new Nook GlowLight and the Nook Tablet.  The GlowLight includes a cool, more readable light that enables readers to still read at night comfortably.  It doesn’t cause eye strain or suck up battery life like the LCD tablets do.

I don’t really see these models as a huge threat to their Kindle counterparts, however, I do think that the Nook Simple Touch at $79 is a better deal than the $79 Kindle, which is not touch screen.

The Kindle Fire is also in more direct competition with the Nook Tablet than the Nook Color.  Refurbished Kindle Fires go for $139 occasionally.  These offers go quickly, so you have to watch closely, or you’ll miss them.

So, in short, if you’re looking for a bargain and a good gift idea for Mother’s Day, this is a good option to consider.

Barnes & Noble has really ramped up the competition with a backing from Microsoft and with the introduction of a Nook with a built in light.  So, it will be interesting to see how Amazon responds.

The leapfrogging between Amazon and its competitors is likely to happen again this year.  Usually the Kindle competitors start the new trend of the year, and Amazon picks up on it, and makes an even better product with it.  Amazon will come up with its own GlowLight Kindle, and I’m sure this year’s refresh of the whole Kindle line up will go at the price to beat.