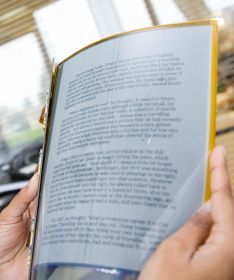 Thin and flexible e-ink displays is one the advances that has been a long time coming. Plastic Logic hopes to bring us this amazing technology by 2009, a cross between the Kindle and actual paper.

Spun off from Cambridge University in 2000, Plastic Logic is now based in Mountain View, California, since 2000 they have been working hard to produce a semi-transparent sheet of tough plastic which can create and erase static images. Plastic Logic haven’t mastered animation yet, but they don’t think it will be too long before they do.

Whilst its headquarters are in Mountain View, California, it also has a manufacturing centre in Dresden, Germany, which is scheduled to open in September 2008. Plastic Logic says its product will be on the market in early 2009.

The company has taken over $200 million in funding to date, and other $50 million funding earlier this year, so all those investors will want to see what products Plastic Logic can come up with.

The obvious application is newspapers and magazines, whether it will be economically feasible for newspapers to ‘print’ on this new generation of e-ink displays is another matter. One possible way of turning a profit for the newspapers could be to sell monthly subscription, with a built in wireless receiver, the flexible display could receive updates for a month before asking the user to renew their subscription. But, I think the most likely–and most profitable–application will be displaying ads on posters and billboards. Learn how to open SWF file.

You can watch a demonstration of the new e-ink displays provide by Plastic Logic;