The biggest complaint about eReaders since Day 1 has been the fact that you can’t read them in the dark.  Now, normally I’m the first to call out such complaints as poorly informed since they tend to involve comparisons between E Ink Kindles and LCD alternatives.  Apparently that will no longer be an important distinction soon.  The Nook Simple Touch with GlowLight has begun shipping ahead of schedule and should already be in the hands of many of the earliest preorder customers.

Now that there are actual devices available for review it is possible to make a more informed comparison.  We can start with the Nook Simple Touch that we already know and love.  The differences between the two models are minimal.  The new incarnation has a gray border around the outer edge of the device, but it is otherwise hard to tell them apart.  It apparently has an screen protector to reduce glare laminated to the display, but this does not reduce clarity in any significant way even in side by side comparisons.  There is no essential loss involved in the addition of the new technology. 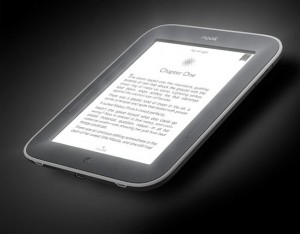 What you gain by going with the GlowLight version of the Nook Simple Touch is fairly impressive.  Any other additions aside, the lighting feature is the important part.  It is not, as some have claimed, an example of back-lit E Ink.  The new Nook uses a type of LED-lit front-lighting to spread the illumination evenly without causing any significant increase in eye strain.  Unlike the situation for many reading on something like the Nook Tablet or Kindle Fire, there will be no noticeable discomfort due to the light even after hours of extended use.  It also does not drain the battery in a shocking fashion.  While I have not had a chance to map out the exact side by side comparisons in battery life with the original Nook Simple Touch, the drain from the GlowLight feature seems to pale in comparison to the WiFi connectivity that comes standard in every device.

There are downsides, as always, but in this case they are minimal.  The extra forty dollars added to a $99 eReader is a fairly big jump, but the expanded number of potential use environments will likely more than make up for that in the eyes of many.  There is currently no option to get this model with 3G connectivity or integrated audio.

The Kindle has a lot of catching up to do.  While they still have what is arguably the best eBook selection on the net, this development puts Amazon way behind in terms of hardware features.  Nothing that has happened since the release of E Ink Pearl has been more important to the development of the eReader as a product and we can only hope that Amazon gets their front-lit Kindle in production and ready for sale as soon as possible.  In the meantime, the Kindle might honestly not be the best option for new users regardless of how much nicer the integrated store is than the Nook’s.