One of the biggest problems with making games for Android devices like the Kindle Fire is that it can be very difficult to create a framework around them.  Yes, there are plenty of stand-alone titles to choose from, but if you’re talking about anything competitive or social then that means potentially huge investments in technology beyond the app itself.

Many app developers have found shortcuts around this problem.  Among the more popular is a service called OpenFeint.  The service provides a relatively easily integrated social gaming platform with a fairly large established user base ready to draw on, but it also runs into issues.  The company running the service has been accused of privacy violations, sharing user personal information with advertisers, and monitoring user activity outside of games.

The lawsuits regarding those complaints and more are still pending.  Whether you believe that the company is a problem or not, though, clearly the adoption of the platform can cause problems for a developer.  You need only look at some of Amazon’s previous “Free App of the Day” selections to see how it affects reviews, especially among Kindle Fire users.

Many have felt the need to incorporate that platform, or something similar to it, in order to provide features like competitive scoreboards and other social features without the need to create an independent support structure for them.  Amazon, fortunately, has provided a better option. 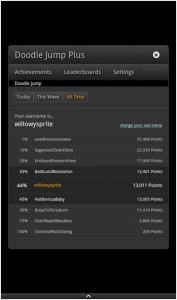 On July 11th, they announced the new GameCircle service.  A series of APIs are now available to developers that allow them to build in achievements, leaderboards, and cloud saving.  It has already been included in a number of popular games, including Temple Run and Triple Town, thanks to a successful beta run involving those developers.

Achievements are a natural way to increase time spent in a given game.  They have become common enough that just about any user will recognize them and they provide arbitrary goals within games that can both guide and reward players in a variety of situations.  The potential for increased engagement that they provide is well known and far more effective when made into a socially shared experience rather than an in-game checklist.

Leaderboards are excellent for any potentially competitive title.  Timed games, anything point-based, and progress competition are all possible.  The implications are obvious.

The most important part of this update, however, is the sync feature.  By allowing a user to sync their progress in a given game without requiring that files be left behind even after the deletion of a title from the device, GameCircle extends the lifespan of games.  Even if you don’t finish a given selection on your phone tonight, you can always pull it up on your Kindle Fire tomorrow and pick up where you left off.  You can even forget about a game and not have to start unlocking levels again from the beginning when you think about it a year down the line.  It’s highly appealing. Learn how to open DAT file.

Overall, GameCircle meets a need.  It eliminates the need for potentially shady alternatives and further incentivizes development specifically for Amazon’s Appstore.  That will be essential for the continued popularity of the Kindle Fire, but anybody with an Android device stands to benefit.