The addition of advertisements to the Kindle line is what has allowed Amazon to drive prices down as low as they have on all eReader hardware in the US.  It’s really the only reason that the eReader was finally pushed down to the $99 and beyond.  While many people were initially upset about the idea of advertising intruding into their reading experience, something that has in recent decades proven fairly inefficient and therefore been disregarded, the way Amazon tackled the problem has left most people satisfied.  No ads in the books themselves is the most important part, of course. 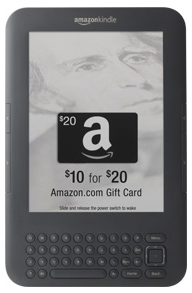 The most surprising thing, in a lot of ways, is how effective the Special Offers have been in providing genuine value for customers.  Among other things, Kindle w/ Special Offers owners have had the chance to buy $20 gift cards for $10, $1 Kindle Edition eBooks, and more.  Amazon has been their own best customer when it comes to these ads despite having some big name partners join in from time to time, and recently there have even been some great local deals springing up as a result of their attempts to take on Groupon.  Naturally this has left some owners of older Kindles, as well as people who avoided the opportunity due to suspicion over the ads, feeling rather left out.

Recently an option was introduced to remove these ads from the Kindle by paying for the difference in initial purchase price.  Definitely an appealing option since it effectively allows new buyers who are hesitant to accept the idea of ongoing advertisements buy into the device now and get the rest of the experience they want when it’s affordable.  It doesn’t hurt that this makes it that much more appealing for new customers to give Amazon’s Special Offers scheme a chance to prove its worth.

The fun flip side is that they quietly introduced the option to turn Special Offers on for Kindle eReaders that either never had them in the first place or decided to buy out of them at some point.  By going into the “Manage Your Kindle” section of the Amazon.com website, most of the work is already done.  Find your eReader in the list (which may include no more than one Kindle depending on how invested you are in the line) and, under the “Special Offers” heading, choose the Edit option.  Turning the ads on and off takes place almost instantly, requiring nothing more than that you turn your Kindle on and connect it to the internet.  Learn how to open DMG file.

I no longer have a Kindle 2 to test out this process with, but I think it is safe to assume that it would not work.  The Kindle 3 (Kindle Keyboard) definitely works, and all newer devices should handle it without any trouble.  If you haven’t had a chance before now to check out the options, it might be worth a try.  Just today I’ve seen a couple tempting ones flipping my Kindle off and on.  I especially recommend if you are in an area covered by the AmazonLocal deals.  Amazon is clearly not pushing people into this, nor do they make it hard to change your mind.  If there’s value to be found, why waste the opportunity?

7 thoughts on “Special Offers Now Available For All Kindle eReaders”