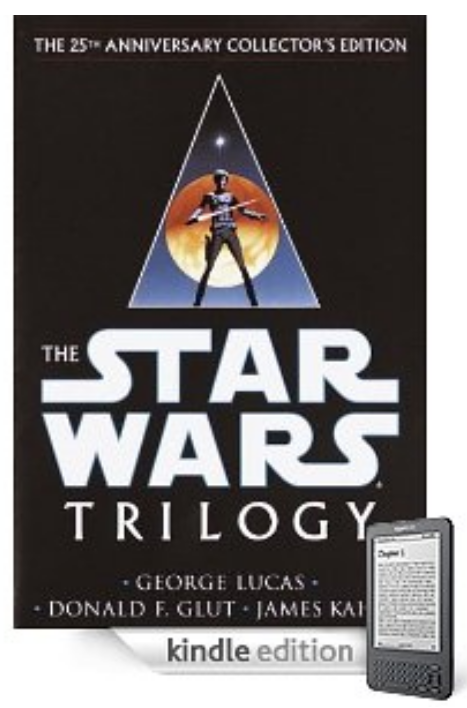 Star Wars fans take note  There have been about a hundred Star Wars e-books added to the Kindle Store in the past month.  You can also find them on the Nook and other e-readers.

You’ll find a number of other Star Wars themed books by other authors that extend the story to the time after the Return of the Jedi, the last in the original series.

Timothy Zahn is one of the authors in the expanded universe of Star Wars tie ins, and he wrote the Thrawn Trilogy.  This series begins five years after the end of the origiinal trilogy and includes the same characters: Luke Skywalker, Princess Leia, etc.  He also introduces a new set of characters.  So, you get a new spin on the story.

The Republic is at peace, but not for long, as Admiral Thrawn, an ex warlord of the empire plots to kidnap Luke Skywalker and his twin sister Leia.

Another Star Wars expanded universe book you might consider is Star Wars: Crosscurrent by Paul S. Kemp.  He is the author of several Star Wars tie ins.  Crosscurrent’s main character is Jedi Knight Jaden Korr.  He sets off to help someone in distress after receiving a Force vision that is quite intense.  This book is action packed, fast moving and quite graphic.

Personally, I learned a lot about Star Wars after doing a little research, and this post just touches on some of the books that are available.  With all of the plot twists and new characters added here and there, it can get kind of overwhelming.  I did not realize that there were so many books written on it.  I’ve mostly heard of the movies and video games.  But, I am excited that Star Wars can be accessed on the Kindle.  You could have the whole expanded universe at your fingertips.