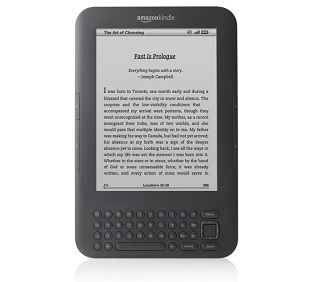 In most of the ways that matter we can safely say that the eBook war is over.  Owning a Kindle is no longer strange or a sign that one is obsessed with gadgets.  Where does all this lead, though?  In many ways there is nowhere left to go for these devices, or at least nowhere obvious, and while they will certainly persist in at least as advanced a form as they have already achieved there is the question of how much room for growth the eReader market will eventually have.

I bring this up because of reliability issues in eReading devices.  Unlike most electronics that I have owned, my worry here is that they tend to be overly reliable.  I have owned a handful of such devices since my first in 2006.  That one, a Sony Reader PRS-500, still works as well as the day I bought it.  The battery was a little worse for wear after sitting for six months in a closet, but the screen is fine.  The same is true of every other example I have on hand.

Until now, upgrading was a matter of often drastic improvements in screen contrast and refresh rate.  Five minutes on a first generation Kindle will have you tearing your hair out if you’re used to using a Kindle Keyboard.  With E Ink Pearl displays we have hit a point where you are basically looking at paper.  Thanks to the Nook Simple Touch w/ GlowLight, and soon its anticipated Kindle counterpart, we are able to read in the dark without trouble.

Short of introducing color and non-perceivable screen refreshes there is not a lot of room to grow.  If anybody manages to figure out both of those without introducing severe downsides like battery life reduction then chances are good that the displays will be more useful on tablets anyway and the dedicated eReader will remain a niche purchase.

If we have a product that will not likely see much in the way of hardware improvement beyond the next generation or two, especially one that can last as long as a Kindle, it could cause rather lower sales rates than one expects in consumer electronics.  The newest eReader I own has already outlasted the newest laptop I own despite having seen ten times the use.  Looking purely at the hardware side of my purchasing pattern would give the wrong idea about my preferences as a consumer.

Essentially, I’m wondering how long the idea that the hardware and media sides of the Kindle business model can be kept even nominally separate.  There may come a time when stagnant growth for the line is not the sign of problems.

I don’t doubt that eReaders in general and the Kindle in particular will continue to be updated.  If nothing else, there are parts besides the screens that will need to be updated to keep up with new software features as time goes on.  I only wonder how often people will feel the need to upgrade.  It is hard to see huge performance improvement as a necessary factor when you’re talking about a device meant to emulate the experience of flipping over pieces of paper to see what’s on the other side.

3 thoughts on “Thoughts on the Future of the Kindle eReader”