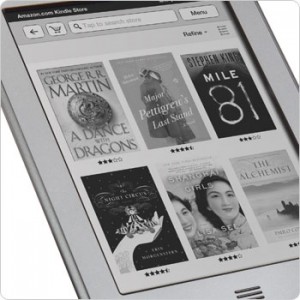 Let’s say that you know you want to buy a brand new Kindle eReader.  It could be for a Christmas gift, a charity donation, or just because you’ve been wanting one.  Technically I suppose you could just have a desire to use the new Kindle to wedge under the leg of a desk to stop it from wobbling, but if so then we have different priorities and budgets.  Anyway, there are a couple options right now as far as which to buy, so it’s important to know what you want to get out of it.

This part doesn’t matter too much.  Basically any modern eReader will be making use of the E INK Pearl display and the Kindle family is no exception.  Unlike an LCD, you can read on this type of screen with no eye strain in any sort of lighting that would work with a normal paper book. In an extremely minor way the Kindle Touch might be at a disadvantage here since there is a likelihood of fingerprints, but in practice they are surprisingly minimal and don’t have an effect on anything that quickly wiping the screen down every couple days or weeks won’t fix.

The Kindle Touch is far superior in terms of interacting with your books.  If you have any interest in taking notes, highlighting, or just about anything else besides flipping pages while you read, then the touchscreen will be practically necessary.  The Kindle 4’s directional control is fine for choosing a book, but using the virtual keyboard is tedious at best and you’ll find yourself avoiding it quickly.

The storage space on the Kindle Touch is effectively twice that of the Kindle 4.  While this might seem at a glance to be a big deal, in actuality it won’t come into play much.  There are only so many books you can easily navigate at a time anyway which means most people hit their limit well before the Kindle’s storage fills up and start archiving titles that aren’t needed.

The battery life is also doubled on the touch model by comparison.  Once again, however, it doesn’t much matter.  The cheaper model still gets a month of use in between charges.  When you hit the point where your biggest problem is remembering where the charging cable was after such a long time has passed, it stops mattering much which eReader wins.

Obviously the Kindle 4’s price is its biggest advantage.  An $80 price tag makes it the cheapest major eReader on the market.

The Kindle Touch weighs slightly over 25% more than the Kindle 4.  It’s a fairly negligible amount, and both devices are comfortable to hold in one hand, but every bit helps.

Hands-down, the Kindle Touch provides the most extras aside from simple reading.  It has text-to-speech, audio playback, optional 3G, simple PDF zoom and scroll control, and Amazon’s new X-Ray feature.  While none of these is likely to be enough to sell the device on its own, the ability to access audiobooks and PDF documents easily is likely to be important for some people.

Basically, the Kindle Touch has the most to offer you.  It does everything that the Kindle 4 can do and more, for just $20 price difference.  This isn’t to say that the Kindle 4 has many problems, because if all you want to do is read cover to cover in your favorite books then it’s wonderful, it just isn’t as versatile.  We’ve effectively reached the point where all new eReaders will be equally pleasant to use for basic reading, so I’m forced to weigh other factors more heavily.  Regardless of that, the Kindle will almost certainly be enjoyed regardless of which one is chosen.

8 thoughts on “To Touch, or Not To Touch: Choosing Kindle 4 vs Kindle Touch”