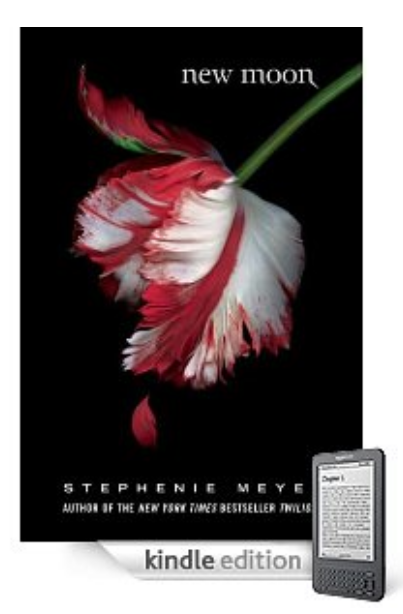 New Moon is the second book in Stephenie Meyer’s Twilight Saga.  It is a really dark book, which makes it’s title, New Moon, very appropriate.  It is $8.99 on the Kindle and Kindle DX.

New Moon is a bit Romeo and Juliet-esque because it involves similar circumstances and depression.  Bella celebrates her 18th birthday with Edward and his family.  She ends up cutting herself to the point of bleeding and, as vampires, the Cullen family is overwhelmed with the desire to eat her.  When they realize how much of a danger they are to Bella, they decide to move away.

After Edward moves away, Bella suffers from a deep depression and seeks solace from Jacob Black.  He and his tribe are werewolves.  They protect Bella from various threats and revenge attacks.  A bit of miscommunication becomes a matter of life or death for Edward, but will Bella save him in time?

Sometimes I am shocked at the dark nature of young adult novels, but in a sense they do address major issues that teenagers today have to deal with.  That includes depression and struggles relating to romantic relationships.

New Moon didn’t get as good of reviews as it’s predecessor, Twilight, but here are a few I thought were interesting.  Many complain about what a sap and over the top Bella is, but in a sense this is what teenagers can relate to.

“I’m glad that there is a popular Native American character and that he is a potential love interest for the main character instead of just in the background. I’m not glad that Jacob’s character is so devoted to someone who repeatedly hurts him (Bella even admits that she’s being selfish by wanting Jacob with her even though she doesn’t return his romantic feelings). This book isn’t for me, but I’m glad other people have enjoyed it. If you enjoy a good love triangle, then you’ll like this book. If you find such drama annoying, then you’ll hate it. Again, it just depends on what you’re looking for.”

“If Stephanie Meyer played on our sympathies by showing us a weak Bella in Twilight, I think she tried to compensate by breaking her out of that mold in New Moon. All of a sudden she starts acting out, being reckless with her motorcycle and cliff-diving. Likewise, we don’t see much of Edward but learn much more about Jacob. Makes me wonder if she felt bad for leaving us in the dark about him in the first book.”

“kay, so this is a lot of people’s least favorite in the series. The pacing in the book is dreadfully slow. Bella spends a lot of time wallowing and doing harmful things. But it resonates true and it makes the ending in Italy that much more exciting. Finally, Edward and Bella are together for all about 5 minutes. It’s a wonderful prelude to book 3.”