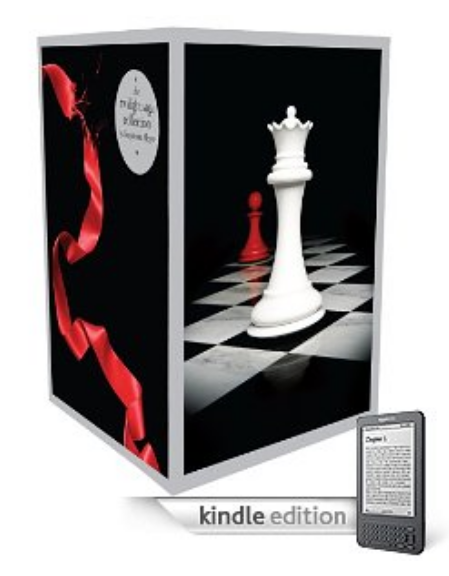 I’m sure many of you are familiar with the Twilight series by Stephenie Meyer that has been a huge book and movie box office success. You can get the whole Twilight saga on your Kindle or Kindle DX for $36.99. This is a great deal considering individual Kindle Bestsellers usually run about $9.99 or up each.

The first book in the Twilight series: Twilight, introduces Bella Swan, who moves from Arizona to Washington State. There, she falls in love with Edward Cullen, a vampire. After showing up out of nowhere to save Bella from getting hit by a bus, Bella and Edward form a deep bond. Jacob Black, a Native American who gains the powers to morph into a wolf, competes with Edward for Bella’s love. He only had a minor role in Twilight, but takes on a much larger one in the later books in the series.

“Jacob was my first experience with a character taking over—a minor character developing such roundness and life that I couldn’t keep him locked inside a tiny role….From the very beginning, even when Jacob only appeared in chapter six of Twilight, he was so alive. I liked him. More than I should for such a small part…“

The Twilight series has captured the attention of teenagers and adults alike, and has rivaled the success of Harry Potter. Vampires have been a really popular theme in recent years due to the success of the Twilight series. The romance element, particularly the love triangle going on between Bella, Edward and Jacob, adds another twist that readers of many ages can relate to.

A few helpful reviews about the series as a whole:

“The story arc draws you in and captures you to the point where you can not put the books down wanting to know what is going to happen next and whether Bella and Edward make it together as a couple and to see how they get through all the hurtles that are thrown their way by the antagonists within the story (who by the way are so interesting on their own that you want to know more about them and the world of Stephanie Meyer’s vampires and their evolution). Suffice it to say, by the time I finished reading this series I felt bereft that there was no more books and that the series and come to its end…”

K. Foster “K. Foster, M. Msc” provides a good list of the themes in the series:

“Besides the obvious romantic theme in this series there are many other messages. Such as: acceptance of others, family relationships, getting over prejudices, spirituality, and following your dream.”

“The story of Edward and Bella is the story of true love. a story I can relate to… she writes of the love they have for one another in such a way that it grabs you by the hand as she takes you for a walk thru Forks, WA and the humor, jealously, anger, heartbreak, and extreme love of two young kids looking for what all people around the world are looking for…”

So, question: Are you Team Edward, or Team Jacob?