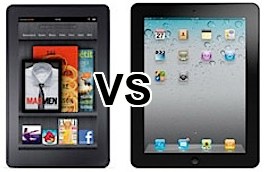 Over the past several weeks there has been significant speculation over the possibility of a newer, smaller iPad on the horizon that is intended to compete directly with the Kindle Fire.  As much as it sounds plausible when looked at in a certain light, I just fail to see it in the end.  There are a few reasons, but in the end it comes down to different audiences.  For Apple to seriously put a stop to the popularity of the Kindle Fire, they would have to address Amazon on completely different terms than has previously been the case, and it is not a stretch to assume that Apple has no intention of fragmenting their product line in such a way.

The value of the Kindle Fire is precisely that it does not attempt to be a fully functional tablet.  Sure, it can do a lot of what any other tablet can do, but in the end there are few competitors that fail to beat it out on paper in terms of performance.  What it does do is provide a channel for Amazon’s digital services.  Anything that Amazon wants to serve up to customers is immediately in front of them just a click away and always works on the first try.  Everything else is just left hanging under the Apps tab to work with as best you can.

The iPad, on the other hand, is trying fairly successfully to replace the home desktop as a center for leisurely computing.  Short of playing highly demanding games or manipulating images and video, there is little that Apple’s tablet is unable to take over with moderate success.  You can even use it as a word processor thanks to various Bluetooth keyboards designed specifically for such a use.  The iPad does serve as a conduit for digital purchases, but it is more than that.  You can use it to create and manipulate various types of projects rather than simply consuming. Read how to open PKG file.

Yes, Apple could easily cut into Kindle Fire sales with a 7” iPad 3 priced in the $200-300 range, but it would take more than just having the hardware available.  They would have to prove to customers that they could focus it entirely on convenient consumption.  It is almost counter-intuitive to phrase it like that, but the focused experience is what Amazon successfully leverages in the lack of computing power and I think they would have to be beaten at the game they have helped to define.

This isn’t to say that a smaller iPad would not succeed.  It would probably be huge and have a devastating effect on the emerging budget Android tablet market.  Those most hit by it would be along the lines of the Samsung Galaxy Tab though, not the Kindle Fire.  Until and unless Amazon goes out of their way to pick the fight in a Kindle vs iPad standoff, I think they are fairly safely entrenched for the immediate future.