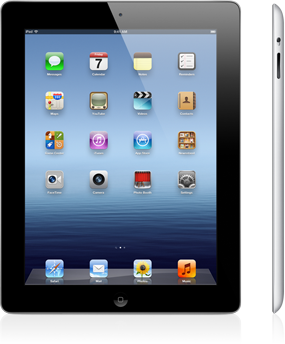 After months of speculation and rumor about Amazon and Apple going head to head in an all-out Kindle Fire vs iPad 3 (or Mini, or HD) confrontation, we finally have all of the information we’ve been waiting for and it turns out that Apple isn’t addressing their “competition” in any significant way.  This should really surprise nobody given the different user bases being served, but it is worth taking a look at what the new iPad can do and how well it does for the price.

The big distinguishing feature of the iPad is that, unlike the Kindle Fire, it is in many ways a computer alternative.  There is little that you can’t do on one, aside from truly hardware intensive tasks, if you are motivated enough to use the touch screen.  The newest iteration of the hardware line is no exception and does a fair amount to improve the overall experience even further.  New features include the move to a Retina Display like that of the iPhone 4, a new A5X Dual Core Processor, one 5 Megapixel camera situated on the rear of the device, Full 1080p HD video recording, 4G LTE connectivity through both AT&T and Verizon, and dictation capabilities.  A fair list that expands on what the iPad 2 already did well.

What does this mean for the Kindle Fire’s future?  Honestly, practically nothing.  This was not, contrary to rumors, a release that intended to kill the Kindle.  As any side by side comparison has long since proved, the iPad already had a larger screen, cameras, a microphone, cellular connectivity, and more processing power.  If no other factors were considered besides simple hardware performance then Apple wins the iPad vs Kindle Fire matchup every time.  The fact that Apple couldn’t help but be aware of this only serves to illustrate that their widening the gap in hardware performance was directed elsewhere; most likely at heading off Microsoft by increasing momentum before the first Windows 8 Tablets start hitting stores later this year.

The biggest factor is still going to be the price for most consumers.  For all its impressive power, the iPad 3 still runs at least $499 for the cheapest model with no 4G connection.  Even the iPad 2, the cheapest version of which has been kept on at least temporarily at a discount to consumers, is twice the price of the Kindle Fire at $399.  None of the major advantages that the Kindle offers in terms of size, weight, or affordability have been addressed.  While you can’t say that any of those is universally acknowledged as the most important factor in tablet purchasing (the iPad is not suffering a bit by most accounts, nor does anything from Amazon seem to indicate that they were expected to be by now), they are the things that people take into account when deciding on a new device purchase.  For the moment, these remain two completely different types of tablet.  The iPad works as a functional PC alternative while the Kindle Fire is all about the consumption.  The next big chance to change the equation won’t be until the details are announced for the upcoming Kindle Fire 2.

2 thoughts on “Will Newly Revealed iPad 3 Kill Kindle Fire? Is Apple Even Trying?”