It seems the rumor mills just won’t give up on the idea of a 7-8” iPad.  We’ve been hearing rumors about the development of such a device for well over a year now that have yet to manifest.  At this point having one announced would almost make me wonder whether it wasn’t a response to the popularity of the rumors rather than the rumors being a reflection of actual development.  Either way, iPad fans are convinced that if and when such a tablet is released it will spell the end of the Kindle Fire. 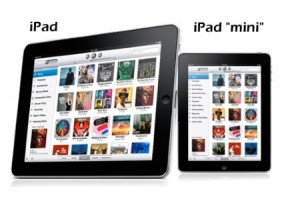 Of course it is also being touted as Apple’s answer to the anticipated Windows 8 Tablet boom later this year.  There is a very real impression that some people think all Apple needs to do is get this one last product to market to prevent anybody else from having the opportunity to break in.  Unfortunately, the rumors don’t really explain why they would want to.

Depending on the source, we are talking about a 7”, 7.85”, or 8.1” iPad running at 1024 x 768.  Essentially a scaled down version of the first two generations of the line.  There is no explanation of how this will reduce prices enough to really make such an offering attractive.  An iPad Mini would have to be scaled down in other ways as well.  This would probably need to be more than just reduced battery life.  We’re talking about a comparatively underpowered processor, reduced storage space, etc.

I won’t make the claim that this product will never appear.  It feels that way a bit now though.  Even if we assume, as many of these rumors do, that Apple made no effort to directly match price with the Kindle Fire and sold this smaller iPad for $299, it would mean the lowest profit margin they have taken to date.  Every iPad being sold right now makes the company at least $200 profit, according to analysts.  Apple is not a company who sells their hardware at a loss, as a rule.

Even if we do take the leap of faith and assume this happens, will it change things?  The Kindle Fire is marketed to a completely different audience than the iPad.  This might not, and probably will not, always be the case.  For now we have to assume that Amazon is dedicated to developing the product as a means of ever-improving media consumption, though, and as such there is little need for the kind of versatility that the iPad manages.

Amazon would lose those customers who just want an iPad anyway but who are unwilling to spend enough money to pay for the larger, more expensive models.  They are still going to be in a position to undercut Apple on the hardware prices due to the lack of reliance on device sale profit margins.  This means that the customers who just want a smaller, cheaper tablet with access to a lot of features will still have a good chance of buying a Kindle Fire, or whatever the current model is called by the end of the year.  An iPad Mini would upset the balance and be a big blow to the general Android Tablet market, but chances are good that the Kindle Fire could weather it.  Somehow I still doubt we will have a chance to find out for sure.